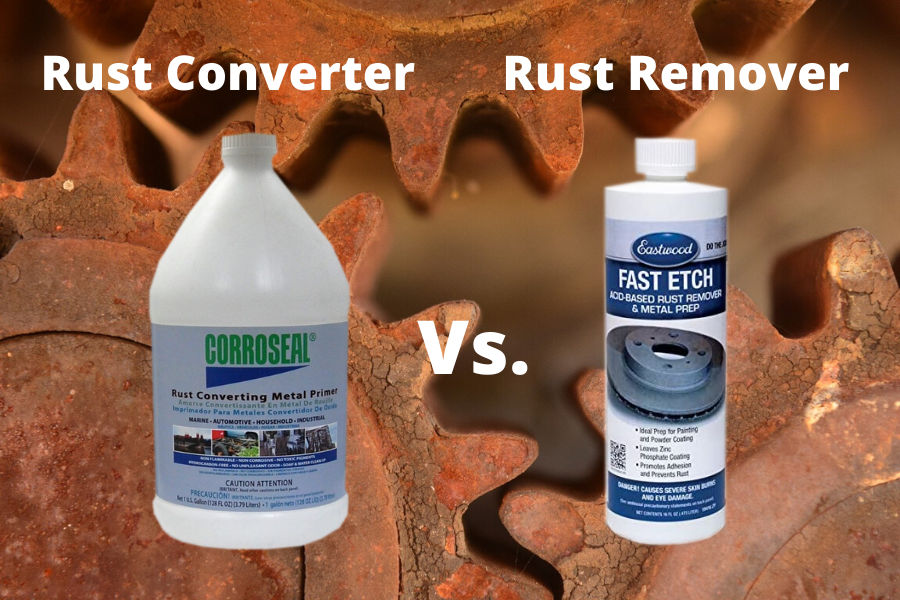 If you’re the owner of any valuable item made of metal, you know that rust is the enemy. Rust corrodes metal, so if you want to protect your precious metallic possession against it, you need to make friends with products that eradicate it: rust removers and rust converters. But how do you know which one to use and when?

Rust removers separate rust from metal, while rust converters turn rust into a stable compound. Both are effective at preventing rust, but their use depends on the rust that is present. Knowing the difference and how they work will help determine how and when to use them.

Read this guide for the nitty-gritty on rust zappers and which type should be used for your particular circumstance.

The fancy name for rust is iron oxide. It results when oxygen naturally mixes with iron. This process is known as oxidation. Both converters and removers interfere with this process but in different ways. Some metals, like bronze, can form a protective layer of corrosion called a “patina.” Iron corrosion, however, is destructive, not protective.

What Is a Rust Converter?

A rust converter is a water-based chemical treatment that turns iron oxide into a more stable form, such as iron tannate. This means heavily rusted areas are turned into a protective coating. Converters are typically applied to rust you can’t remove. They work best with rust that’s worse than a surface discoloration. A phosphoric acid-based rust converter prevents rust from returning, but it’s not the complete solution. Rustproofing is still necessary.

Rust converters have the advantage of being less invasive, as they involve little preparation. All you need to do is dust off loose rust and clean soiled areas before application.

Warning: Rust converters need 100% rust present for them to work correctly and to fully cure. You need to apply a top coat to the surface after it is cured. Rust converters aren’t meant to be rust proofers. Rather, they’re used to convert rust to an inert compound that forms a barrier layer against corrosion. This then paves the way for another product to do the rustproofing.

The Best Rust Converters for 2022

Our favorite is Corroseal Rust Converter and Metal Primer. It doubles as a surface latex primer that can be painted on. Non-flammable and non-corrosive, its water-based formula isn’t toxic to humans and the environment.

Another rust converter that we recommend for maximum effectiveness is Dinitrol RC900. It penetrates rust 7-10 times deeper than standard converters. Containing a complex organic chelate [1] base and epoxy resin [2], the RC900 is free of lead, zinc, and chromium.

What Are Its Uses?

Rust converters are usually applied to objects difficult to sandblast, such as cars, trucks, trailers, industrial equipment and machinery, farming equipment, sheet metal, and the exteriors of storage tanks. They are also used on domestic outdoor fittings and fixtures, like fences, gates, and iron railings.

The National Center for Preservation Technology and Training (NCPTT) explains that rust converters are essential in conservation. They’re used extensively to restore, preserve, and stabilize iron-based items of historical importance, such as museum artifacts and collections, as well as architectural elements and outdoor sculpture.

Conservators utilize rust conversion products for artifacts not containing heavy chloride-induced corrosion (objects not heavy in salts or near saltwater).

How Does It Work?

A rust converter works as a two-part system with rust as the activator. Its active ingredients, phosphoric acid or tannic acid (or a combination of both) and an organic polymer, convert iron oxide into an inert layer of iron phosphate, which is black. This layer acts as a barrier or protective coating.

A converter eliminates the need to sandblast rust, so less time and energy is involved in the process. It’s not UV-stable, however, and isn’t meant to be a top coat but a paintable primer.

When to Use It

As equipment and vehicles age, they need regular rustproofing as protection from corrosion. Vulnerable automotive parts that need rust converters include the undercarriage, the wheel wells, and the area around the windscreen or bumper.

Don’t use converters on these:

How to Use Rust Converters

Before applying a converter, use a wire brush or wheel to slough off flaking rust from the area to be protected (rather than sealing it in), then clean and degrease it so that any contaminants present won’t interfere with the conversion of iron oxide.

Wait for the entire rusted surface to turn purplish-black. This means the converter has finished curing. It may take two to four coats to fully convert a surface. Then apply an underbody wax (on the undercarriage of a vehicle, for example) for long-term rust prevention.

What Is a Rust Remover?

It is a product that speeds up the process of removing rust from a metal surface. Its main ingredient is oxalic acid. This reacts with iron oxide, causing it to separate from the metal surface. Once the rust has disappeared, a stable surface is now ready for priming and painting.

How Does It Work?

There is no chemical process involved, just the application of the rust remover to the affected area. But before you apply it, sand away as much of the rust as possible. Make sure that all traces of rust are removed before applying a rustproofing underbody or cavity wax.

If you don’t want to use chemical solutions to remove rust, I suggest household items like Coca-Cola, white vinegar, potatoes, baking soda, and lemon juice. Use steel wool, sandpaper, or crumpled tin foil as scrubbing tools.

What Is a Rust Encapsulator?

This is a universal “paint over rust” base coat that seals in rust and stops it from spreading. It flows into hard-to-reach areas, penetrates deep into the rust, and fills in pinholes and surface imperfections. It can be applied to any surface, even partially rusted ones. It is the last step in the rust neutralization/removal work before starting with primer, paint, and the rest of the finishing process.

In theory, the perfect anti-rust solution is to get new panels/parts and weld them in. But if equipment, vehicles, or fixtures are exposed to oxygen and the elements afterward, rust is unavoidable.

we suggest a more practical solution they regularly use for automotive projects. Remove excess rust, then spray pre-paint. Once it dries, wipe it down, then apply a rust converter. Follow up with a rust encapsulator. Apply a top coat for a satin finish. This process can be applied to other metallic structures.

[1] A chelate is a chemical compound composed of a metal ion and a chelating agent. A chelating agent is a substance whose molecules can form several bonds to a single metal ion.

[2] Epoxies are thermoset (set permanently when heated) plastics made by the reaction of two or more industrial chemical compounds. Epoxy resins are used in a wide array of consumer and industrial applications because of their toughness, strong adhesion, chemical resistance, and other specialized properties.