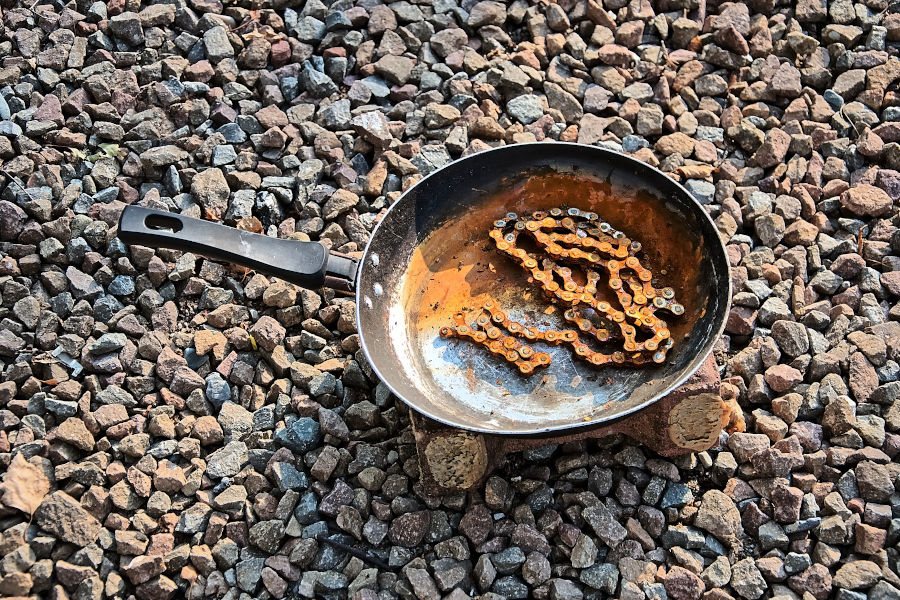 Yes, the question from the title of this article can be quite common, especially among homemakers. More than a few of us know what rust is; we know where it comes from, its smell, texture, etc. But what would happen if we tried to eat or drink it?

Before I move on to the answers, we first need to establish what rust is, just in case some of my readers aren’t well-versed in chemistry.

Iron and its related alloys react to oxygen and water in a specific way. When it’s left exposed to these two, it tends to develop a flaky, red-brown coat. We know this coat as rust, but its full chemical formula is iron(III) oxide, or Fe²O³.

There is no set time frame to rusting. Typically, a piece of iron can take days, weeks, months, and sometimes even years to get that first coat of rust. It’s an extremely common reaction, since iron tends to react easily when it comes into contact with oxygen. The intensity of rusting will be affected by the amount of exposure the piece of metal gets to water and oxygen.

Naturally, other elements will react to the speed and intensity of corrosion, the most common ones being:

The Many Uses of Rust

Most people think that iron(III) oxide is merely a damaging substance with no real use. After all, if it eats away at the metal, it can’t be good for anything, right? It’s actually this type of thinking that makes people wonder if rust is poisonous when they consume it in some way. But interestingly enough, rust has quite a few uses when it comes to our modern, everyday lives.

Jewelers and people who work with optical components often use a compound called “rouge,” also known as “jeweler’s rouge” or “red rouge.” The compound contains a fine ferric oxide powder capable of giving different surfaces a shiny finish after a good polishing session. Though not as potent and fast as other polishing products, rouge is still widely used by many jewelers and opticians; you can even use a specific type of rouge called a “stropping compound” on leather strops to help sharpen knives and razor blades better.

Average rouge is sold as either paste, powder, polished or laced cloths, or a single solid bar. The powdered version is also a common product in cosmetics.

Producing steel and iron alloys requires a lot of feedstock, i.e. raw unfiltered material. Since 95% of the atomic structure of steel is iron, manufacturing steel demands as much of it as possible. That’s why metallurgy experts use iron(III) oxide for this purpose. It’s inexpensive, effective, and there’s plenty of it out there.

Rust is reddish-brown in hue, so when we extract it as a pigment, we label it as either “Pigment Brown 6” or “Pigment Brown 7,” or even “Pigment Red 101.” We can then use these pigments as dyes for various products. For example, the FDA has approved the use of iron oxides as components in cosmetics. In addition, some people use rust as a pigment in dental composites.

Yes, even the world of modern medicine has found a few good ways to use rust. For instance, 0.5% of iron(III) oxide makes up calamine lotion, which we use for itches and irritation. The rust within the lotion acts as an antipruritic, helping a patient relieve itching. In addition, the lotion gets its famous pinkish hue as a result of the reddish rust mixed with zinc oxide.

As you can see, rust has plenty of uses today, in various fields. But my keen-eyed readers will notice that I still haven’t mentioned anything about consuming rust (and whether it’s bad for us or not). The answer might surprise you by the end, so let’s first look into different ways that we humans CAN end up consuming rust:

Is Rust Dangerous to Eat?

This might surprise or even shock some of you, but by and large, there are really no health hazards in consuming rust.

As nasty as it might look, iron(III) oxide is still iron. Normally, if we do end up consuming rust, we only ingest an extremely small amount of it. Since our bodies already produce iron naturally, there are no real dangers to us adding a bit extra. In fact, ironically enough (no pun intended), consuming rust might even be beneficial for us if we suffer from iron deficiency.

The same goes for drinking that nasty-looking brown rust water. Though it might look and smell awful, it’s not harmful if you decide to drink it. The only real way you can suffer from drinking it is if you have hemochromatosis. In other words, if your body accumulates iron too quickly, then it’s probably a good idea not to drink water that’s literally full of it.

Tetanus is caused by the bacteria called Clostridium tetani, found in animal feces, soil, and dust. If you were to actually swallow a rusty nail or a large piece of metal with lots of rust on it, you might get a lower form of tetanus. Luckily, it is perfectly treatable with a single shot.

However, the most common way of actually getting tetanus is through punctured skin. I should also stress that the bacteria don’t come from rust itself. For example, if you punctured your skin with a sterilized rusty nail, you would not get tetanus.

People who weld, solder, or mine tend to inhale lots of rust dust, which in turn can lead to siderosis. Also known as the welder’s lung, this disease has no cure, though you can treat its early symptoms. However, the disease takes years to fully develop, and we can prevent contracting it by using proper protection like masks.

So, What Happens if You Eat Rust?

I was as surprised as anyone else when I first found out that eating or drinking rust is not dangerous, or that it can be quite useful in certain situations. After all, if we use rust in cosmetic and medical products regularly, there’s no real reason to fear if we swallow a bit of it. So, why do people ask this rust-related question so often?

Well, from what I’ve learned, there are quite a few households that have pots, pans, silverware, and cups that have some minor rust on them. Moreover, there are often images floating around online of what typical water pipes look like, and they are almost always rusty on the inside. Therefore, it’s only natural that people are afraid of contracting a disease or getting poisoned from consuming rust.

Luckily, you have no reason to worry about getting tetanus if you brewed coffee in a rusty pot or if that omelet came from a rusty pan. Even if there were any bacteria on the bits of rust that you consumed, your stomach acid would kill them quickly. Therefore, enjoy your meals and don’t worry about ingesting some iron(III) oxide; it might even be good for you.