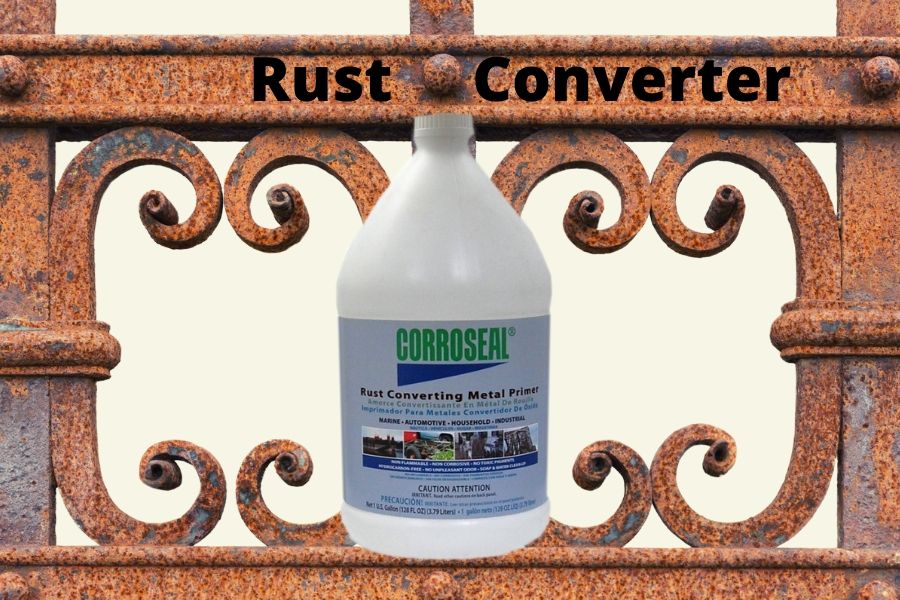 Unless you’re giving your metal the perfect care and maintenance, it is likely that, over time, rust will form on it. If you’re able to act quickly, you can simply scrape it off with abrasive tools, or apply a chemical remover. However, if you wait for too long, the rust can develop to a point where scraping off or applying rust remover will not be enough.

In an instance when the rust has become heavy and flaky, a rust converter is the best option. Applying a rust converter to rust simply kills it and stops it from further spreading on the metal. Although it does not return the rusted surface to bare metal, it is highly effective and offers permanent protection from rust.

The rest of this article will take a more detailed look at rust converters and discuss what they are, how they work on rust, how effective they are in getting rid of rust, and how to properly apply them.

What Is Rust Converter?

Rust converters are chemical solutions that react with rust on metal surfaces to convert it into an inert, insoluble, black protective coating. This eliminates the need for sandblasting or scraping down rust from metal surfaces. It is particularly relevant when used on large rust surfaces where traditional methods are time-consuming and expensive.

The coating formed after the rust converter is applied to help seal out moisture and prevent rust from spreading or forming again. Surfaces coated with rust converters are also protected from elements such as rain, sun, carbon dioxide, and effects of weathering.

How Does Rust Converter Work?

A rust converter also contains an organic polymer that acts as a moisture barrier and provides a protective layer on the surface of the metal. When the rust converter comes in contact with rust, it reacts with it and forms a blue film. As the process develops, the rusted area turns to black as the rust converter becomes dry.

Apart from these two ingredients, manufacturers also add other acids to accelerate the chemical reaction. An example of such acid is phosphoric acid, which converts the rust to inert, black iron phosphate. This layer also acts as protection. Other additives used by rust converter manufacturers are solvents and wetting agents.

Where Can Rust Converter Be Used?

Rust converter can be used on most metallic surfaces, including vehicles, tractors, machinery, tank exterior, fences and gates, tractor, lawn equipment, metal roofs, iron railings and staircases, mower decks, and metal furniture. Typically, it works on any iron or steel surface that has rusted.

However, you should not use it on copper, stainless steel, aluminum, or galvanized steel because it won’t bond effectively. Also, rust converters are not heat resistant, so you can’t use them on your wood stove, grill, engine boiler, or other surfaces that will be heated.

It is not recommended to apply rust converters inside a tank. If you must use it inside your tank, consider it only as a primer and paint over it with a paint that is resistant to what is stored in the tank.

How to Apply Rust Converter to Rusted Metal

Most rust converters come in liquid form and can be applied by either spraying or brushing. Others are water-based and will require use in the form of a solution. In this instance, the rust converter must not be prepared too thin as you run the risk of having it drip off the surface of your metal.

Here’s how to apply rust converter on a rusted surface:

Prepare the Surface of the Metal

The first step in applying a rust converter is to remove loose and flaky rust from the metal surface. You can prepare the surface with a wire brush, sandpaper, or scraper. Be careful not to remove all the rust as this is what needs to be converted and sealed in.

You will also need to degrease and clean the surface with a detergent wash. Saltwater deposits and contamination can be removed with a high-pressure water wash.

After cleaning, allow the surface of the metal to dry completely. As mentioned earlier, you can apply the product with a brush or sprayer. An airless sprayer is recommended if you’re doing the latter. For larger surfaces, you can use a roller to fully cover all the rusted areas.

A single application of rust converter will take about 30 to 60 minutes to dry to the touch. You may need to apply a second coat to ensure maximum protection and rust conversion. Wait until after 24 to 48 hours of curing time before applying a paint coat.

Clean Up After Rust Converter Application

Depending on your method of application, rust converters can create a mess. In most cases, soap and water should be enough for cleaning. If it doesn’t come off easily, use a high-pressure hose.

Do not pour leftover rust converter back into the container as it can contaminate the unused liquid. Your method of disposal will depend on your federal, state, or local regulations.

Rust converter can be toxic and flammable. Here are some safety and storage tips to keep in mind:

Rust converters are an effective way of getting rid of rust. In contrast to other rust removal methods, rust converters kill the rust and prevent it from future spread or growth. They are especially effective when dealing with heavy rust.

Rust converters can be applied by brushing or spraying on rusted iron and steel surfaces. When applying, wear a pair of rubber gloves and safety goggles and ensure the area is well-ventilated. If you swallow rust converter, seek medical attention immediately.

1 thought on “Rust Converter: What It Is & How It Works”