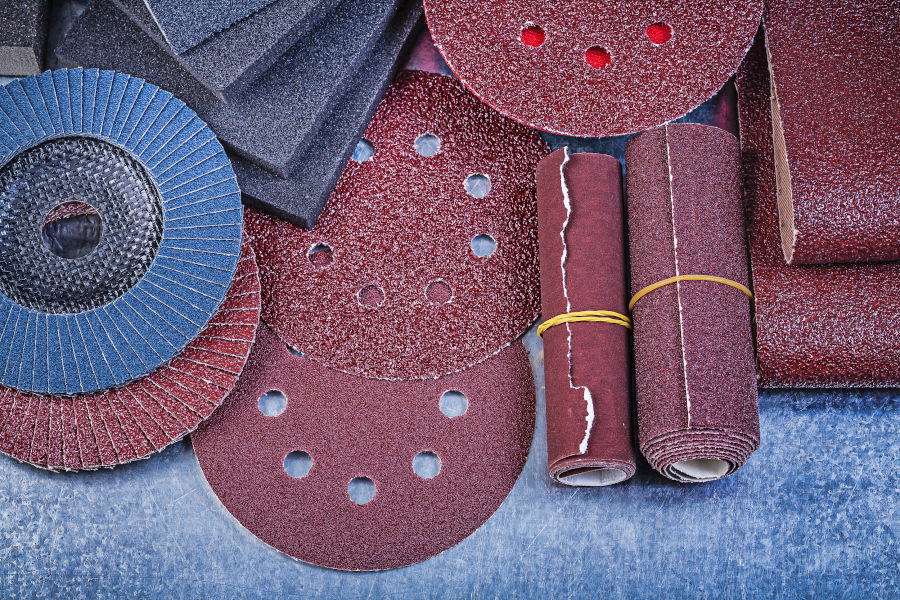 Sandpaper is a great tool for removing stubborn rust that has formed on your materials. But with the multiple different grits available, it can be confusing as to what you should be using. The last thing you want to do is damage your materials, so what grit sandpaper should you be using?

The right grit sandpaper to remove rust from metal depends on the strength and durability of your rusted metals. While coarser materials remove rust faster, they are more likely to leave scratches. Note that finer grits don’t scratch, but it may take longer for your rust to remove.

In this article, we’ll be going in-depth into what grit sandpaper you should be using for certain materials, as well as the pros and cons of using said sandpaper on your rusted items. If you’re interested in learning more, keep on reading.

What Grit Sandpaper Should You Use?

As is stated above, the grit you choose to use should depend on the materials you’re treating for rust, as well as how you’d like your materials to look after you’ve used your sandpaper.

Below we’ll explore some of the grit sandpapers available and the ideal surfaces you should be using them on.

40 to 80 grit is a more coarse sandpaper, and while it’s better at removing rust compared to finer sandpaper, it will leave more scratches.

40 to 80 grit is a good choice for removing rust from machinery like pipes, but it’s not ideal for furniture and antiques that you don’t want to be damaged or scratched.

40 to 80 grit is appropriate for heavy machinery because while it will be very successful in removing rust from these materials, the sandpaper may leave some surface damage that isn’t too visually pleasing.

This is why this kind of grit is not recommended for things like furniture and antiques, as it will not do more harm than good to surfaces you don’t want to be scratched up.

Still a more coarse option, 100 to 150 grit is a medium grit size. This sandpaper is still not recommended on materials you don’t want potentially scratched or damaged, but it will remove your rust faster.

This size grit will remove rust successfully and quickly, but it’s recommended on larger materials such as metal appliances. It’s great for removing rust as well as preparing surfaces as a starting point for most projects.

This size grit is much finer than the previous two we’ve discussed. Also great for removing rust as well as removing scratches left by coarse sandpaper.

This size grit is appropriate for use on more sensitive metal surfaces, such as furniture and decor. This finer grit size will not damage your metal surfaces the way other forms of sandpaper can.

That’s why it’s so important to do your research when it comes to sandpaper grit sizes, as you don’t want to hurt your more sensitive materials. While it’s important to know that coarse sandpaper will remove rust faster, it could also damage your items.

Using anything coarser than 180-220 grit on metal surfaces like furniture that you plan on repainting could seriously damage the paint as well as the metal itself.

A very fine grit size, this is ideal if you’re looking to tackle a small amount of rust.

This is also a great size grit for light sanding and will be very helpful if you’re looking to remove a small build-up of rust that isn’t too severe. This sandpaper will also help remove scratches that were left behind up more coarse sandpaper grits.

You most likely will not need a grit finer than this to remove rust, as anything else won’t be helpful. This grit size is ideal for removing rust from the outside of your car, as it’s fine enough to not damage the metal surface or the paint.

While this is the only grit size that will allow you to successfully remove rust from more sensitive areas, it will take a little bit of elbow grease to remove the rust.

As is stated earlier, coarser grits will have a much easier time removing rust than finer grits. While it may take longer to remove rust with finer grits, it will definitely be worth it, seeing how your metal will be rust and damage-free at the end of the day.

Removing rust takes patience, so as long as you’re well informed on what grit size works best for you and take the time to carefully eliminate rust, you’ll be well on your way.

Hopefully, now you have a better understanding of what grit sandpaper you need in order to remove rust from metal successfully.

We discussed how different size grits need to be used on different surfaces in order to be effective. Coarser grits will remove rust faster, but they are more likely to scratch up the materials they come into contact with.

It’s important to be mindful of the kind of grit you’re using when applying sandpaper to rust. So the next time you start a project that requires sandpaper, you’ll know everything you need to know on the matter.