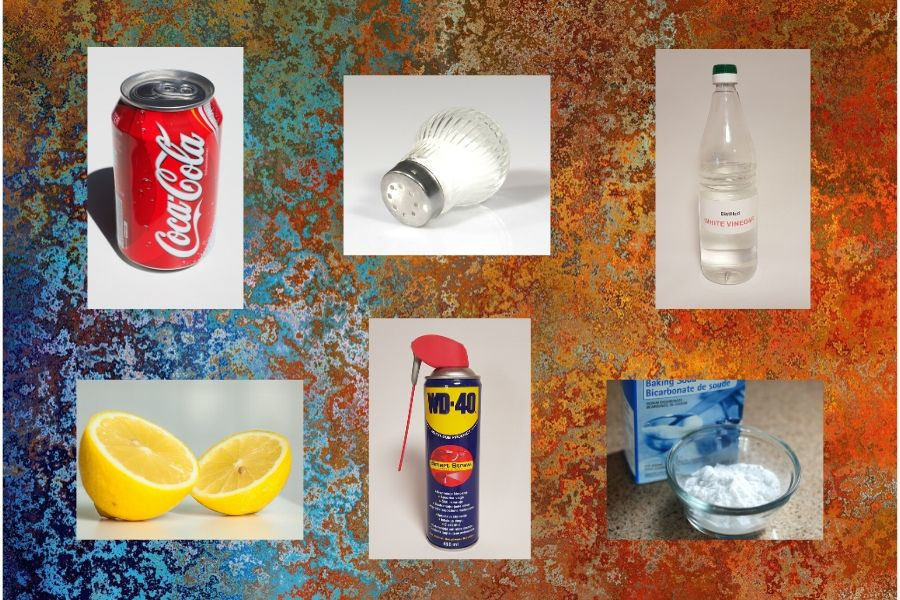 Nowadays, there are many rust removal products available on the market. However, they use incredibly strong chemicals that are harmful to not only the environment but also your health and the health of your children and pets.

Fortunately, you can make a rust remover at home, using items you probably already have on hand. What’s more, they’re much less hazardous than the store-bought solutions.

Before you try any of these at-home rust removers, make sure to give the object a good scrub first and remove the outer layer of flakes.

To do this, you can use:

That will make your job much easier later, when you actually apply one of these solutions.

Also, you can use them to scrub the object after soaking as well.

The acetic acid in white vinegar is strong enough to dissolve even the toughest of rust.

Pour the undiluted vinegar in a container and place the rusty object in it. In case the object is too large for that, you can simply spray it with vinegar. And if you only want to remove a small spot of rust, you don’t have to dunk the whole object in vinegar, you can simply put a few drops on the most critical spots.

Around 30 minutes of soaking should be enough. Still, if the rust is stubborn, let it soak for a while longer. You can also try scrubbing it with steel wool or a toothbrush.

After that, rinse the object and dry it off with a clean cloth. Make sure the object is completely dry before putting it away.

Keep in mind that some metal objects can turn black when you soak them in vinegar, lemon juice, etc. However, that should wash right off when you start scrubbing.

Most of us have lemon and baking soda lying around somewhere in the kitchen. Well, this time, instead of using them to make dessert, you’ll need them to get rid of rust. In case you don’t have baking soda, you can use Borax instead.

Simply combine the two until you get a thick, but spreadable paste. Then, apply the paste directly to the rusty object and let it sit for at least 30 minutes (longer, if needed). If you notice the paste drying out and falling off, put a few drops of water on it to rehydrate it, then spread it on the object again.

You can use steel wool, a wire brush, or a toothbrush to scrub off the rust once the lemon-baking soda mixture has taken effect. If you’re not happy with the results, just repeat the whole process.

In the end, make sure to give the object a good wash and dry it thoroughly.

While we mostly use it to disinfect wounds and prevent infection, hydrogen peroxide is also great at removing rust from metal objects.

You can either apply it to the rust directly or make a paste using baking soda or cream of tartar. If you opt for the paste, the principle is the same as with the lemon juice mixture — simply spread it all over the rusty bits.

Whatever you do in the end, wait for about half an hour before scrubbing. Finally, rinse it with water and dry it off.

Tired of your old rusty pots, pans, and knives? Well, it’s time to give them a glow-up. And, surprisingly, you only need a potato and some salt to do it! It can’t get any more natural than that.

The thing is, potatoes contain, among other things, phosphoric acid, which is quite effective at rust removal.

For starters, slice the raw potato in half and put some salt on the flat sides. Once you’ve done that, scrub the pot using the potato, flat-side down. The acid from the potato should dissolve the rust, and the salt should help scrub it off.

If you have a knife that you need to remove rust from, you can insert it directly into the potato and let it sit for about a day. After that, the rust should come right off.

Again, once you’re done, wash the object with water and dry it as best as you can.

Believe it or not, one of your favorite refreshing beverages can also act as a powerful rust remover. Much like the potato, Coca-Cola and other soft drinks contain phosphoric acid, a well-known chemical that many store-bought rust removers use.

To begin, pour the Coca-Cola or any soft drink of that kind into a large container and submerge the object in it. If the object is too large to do so, simply pour Coca-Cola directly on its rust spots and start scrubbing right away.

Leave the item soaking for at least 24 hours. If you see an improvement, you can take it out and scrub off the residue rust and sugar syrup using a toothbrush or crumbled tin foil. On the other hand, if you don’t see any difference in 24 hours, leave the item in there for a bit longer.

In the end, give it a wash and dry it off.

Although this method can be effective, the sticky Coca-Cola residue can be quite annoying and tough to remove. In my opinion, other methods that I listed are just as, if not even more effective, and there’s not as much cleaning to do afterward.

WD-40 is the name of a company that specializes in water displacement sprays. They’re known for their multi-purpose sprays, but they also carry other, more specific products.

Around 80% of Americans have WD-40 in their households. It can come in handy, as it’s not only an effective rust remover but also a great lubricant and cleaner.

Spray the rusty parts with multi-purpose WD-40 spray and wait 10 minutes before scrubbing with a toothbrush or some other tool. Keep in mind that it’s better to use something with soft bristles to prevent scratching the object. The WD-40 is strong enough on its own, so it’s not necessary to use steel wool or a wire brush.

On the other hand, you can get the WD-40 specialist rust remover soak and submerge the object in it for about half an hour or more for bigger objects and more stubborn rust. However, before you do that, I advise you to scrub and wash the object first.

And, as always, if you’re happy with the results, wash the object and dry it thoroughly. If not, repeat the process all over again.

What Everyone Can Do to Prevent Rust

Once all of your tools, jewelry, pots, and pans have been de-rusted and shined to perfection, you need to make sure they stay like that for as long as possible. Prevention is key when it comes to rust and corrosion.

In light of that, here are some easy ways you can prevent rust from occurring. Again, I focused on methods that everyone can do at home, without having to purchase any products or chemicals.

First and foremost, you should make sure that all of your tools and other metal objects are dry at all times. Don’t store them in a humid environment, as they’ll rust much quicker than you’d expect.

And if you have no choice but to leave them in a humid basement or garage, consider getting a dehumidifier to keep the moisture at bay.

While many people completely disregard this, it’s important to clean your tools regularly. Same goes for other metal objects that can easily get dirty, such as jewelry and some kitchen utensils.

Dust and dirt hold water well, and if they accumulate on a metal object, it will rust in no time. So, make sure you give it a good occasional scrub.

Also, you should act as soon as you notice rust, even if it’s small, and apply one of the rust remover solutions I listed above.

Coat It with Oil

Obviously, you can’t protect large, outside metal items such as a fence or a bicycle from ever interacting with water. However, what you can do is apply a layer of coating that can repel water and significantly slow down the oxidation process.

For instance, any oil will do just fine. As you probably know already, oil and water don’t mix. So, by coating a metal object with oil, you’re creating a barrier that prevents water from coming in contact with the iron, and thus rusting.

You can also use WD-40, the multi-purpose spray that I previously talked about. Simply coat the object in it after every wash. Use a toothbrush to get it in all the nooks and crannies, as that’s where rust will occur first.

And if you happen to haveacrylic paint just laying around in your house, you can also use it to prevent rust and corrosion. Simply paint on a thin layer of it and that’s it.

Just make sure to use acrylic and not water-soluble paints, otherwise you’ll get the opposite of the desired effect.

If you don’t have acrylic paint, you can also use enamel-based oil paints.

If you’d like to avoid cleaning and scrubbing altogether, you can buy items that are made from stainless steel. They’re a bit more expensive than those made from regular steel, but they’ll surely last you a lifetime.

Also, you can buy galvanized tools and other items or you can galvanize them at home yourself. In case you don’t know, galvanization is the process of applying zinc to an object or immersing the object in the zinc to create an extra layer of rust protection.

I suggest that you be careful when handling old, rusty items, especially nails. While rust isn’t harmful per se, the bacteria that it typically hosts definitely are. If you accidentally puncture your skin with a dirty nail, you run the risk of catching the tetanus-carrying bacteria that are typically found in soil and animal feces, and getting a nasty infection.

Finally, make sure to keep WD-40 and other chemicals out of reach of children and pets.