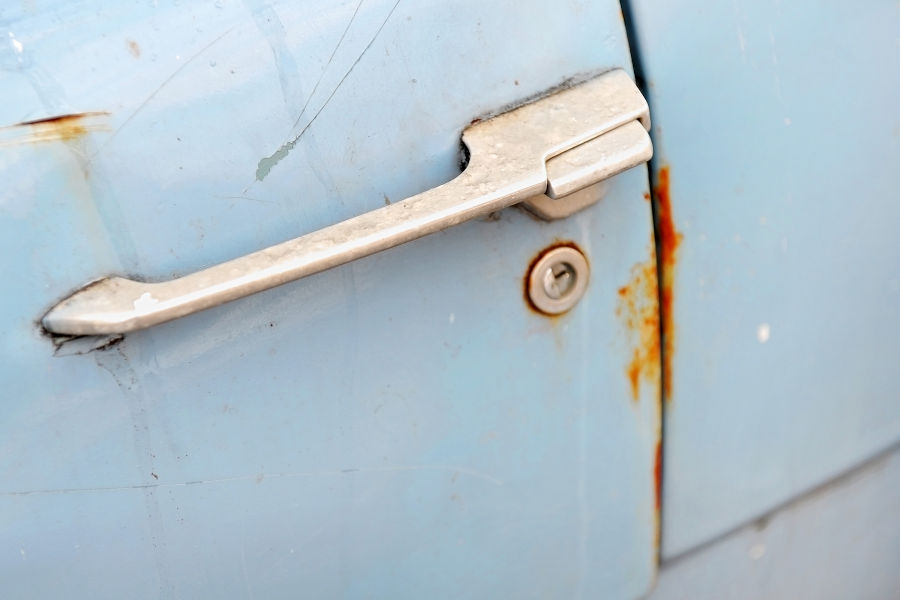 Rust can be found anywhere with enough oxygen and moisture. Cars are often treated to prevent rust, but it’ll still show up eventually. The hinges, side panels, and lower portion of the car door are especially susceptible to rust. Fortunately, it’s not too challenging to remove it from the vehicle.

To remove rust from car doors, start by scrubbing the surface with tin foil and scouring pads. Next, use an anti-rust spray followed by a rust primer to strip and prevent rust from reforming. Finally, wipe it down, and repaint it with the manufacturer’s paint recommendation.

Throughout this article, you’ll also learn the following information about removing rust from car doors:

1. Scrub the Rust With Tinfoil

Tinfoil and dish soap is a combination to fight all sources of rust. Whether you’re removing it from the spokes of your bicycle, the rims of your car, or the door frame, all you have to do is crumple a piece of tinfoil into a compact ball, dip it into a solution of warm water and dish soap, and scrub it against the surface.

Remember that the rust likely weakens your car door. If you notice a porous surface on the door, it’s important that you don’t scrub too hard. Otherwise, you could risk damaging the door beyond repair. Gentle circular motions will be enough to get you to the second step.

2. Remove Rust With a Scour Pad

Using a scouring pad can make a world of difference. Heavy amounts of rust can be a bit too much for tinfoil, in which case you could use a scouring pad. Since they have more cushion, you can apply firm pressure when using these pads.

If you don’t have any of them lying around the garage or in your kitchen, try out the Scotch-Brite Heavy Duty Scour Pads. They’re made of 100% recycled materials, and you can remove rust from kitchenware, automotive parts, and more.

3. Use an Anti-Rust Spray

Next, take an anti-rust spray and apply a thin layer over the rusted surface. This step is relatively easy, but make sure that you’re wearing protective gear. A mask, goggles, and gloves should do the trick.

If you’re looking for a top-of-the-line rust inhibitor, try Rust-Oleum for Automotive. All you have to do is spray it over the area and wait for a few minutes while the rust goes away.

4. Use a Rust Primer

Rust primer is equally as important. It prevents rust from coming back, which is essential if you don’t want to have to keep coming back. Not only that, but using a rust primer will also prevent your car from getting permanently damaged.

Priming the car door to prevent rust might be the most time-consuming part of the process. It doesn’t take too long by itself, but you usually have to wait for 10 to 30 minutes while it dries. You’ll also likely have to do a second layer, but always follow the guidelines labeled by the manufacturer.

Once the second layer of primer dries, sand the surface down with sandpaper. This step should be fairly quick, but it’s essential that you level out the primer. It should look and feel as smooth as the rest of the paint. Use a fine grit to preserve the appearance, such as 150-grit sandpaper.

If you have a sanding tool, set it on a low setting and work in circular motions. Otherwise, use your hand to firmly press the sandpaper against the primer and scrub it in the same way. The goal is to remove the primer’s clumps along with any residual rust that might be leftover, though there shouldn’t be too much.

Wipe everything down with a soft microfiber cloth. Never use an abrasive towel after sanding the surface since it might strip the primer or anti-rust spray from the area. Using a cloth, such as the Mr. Siga Microfiber Cleaning Cloth, will remove debris and moisture from the car door without stripping the primer.

Next, check the inside of your car door for the manufacturer’s paint code. Some cars have the code inside of the door, while others have it in the glove compartment. If you can’t find it, look it up online or call a local car dealership with the make, model, and color of your vehicle. Once you’ve found it, purchase the correct paint and apply it to the surface as recommended.

Note: Never use paint that “looks like” the color of your car. Not only will it not look the same when it dries, but automotive paint is much tougher than traditional paint.

Finally, it’s good to use a final layer of rust-prevention spray on top of the paint once it dries. Apply it over the painted area, allowing it to dry before you open or close the door. When it’s dry to the touch, you’re free to operate the vehicle normally.

That’s all there is to it! As you can see, removing rust and repainting it is quite an easy process.

The longer you leave rust on your car door, the more damage it’ll cause. Eventually, the paint and metal will start to corrode, costing you more money than it ever should’ve. Luckily, you can follow this simple eight-step process to get your car looking and performing as it should.

Here’s a quick recap of what you need to do: