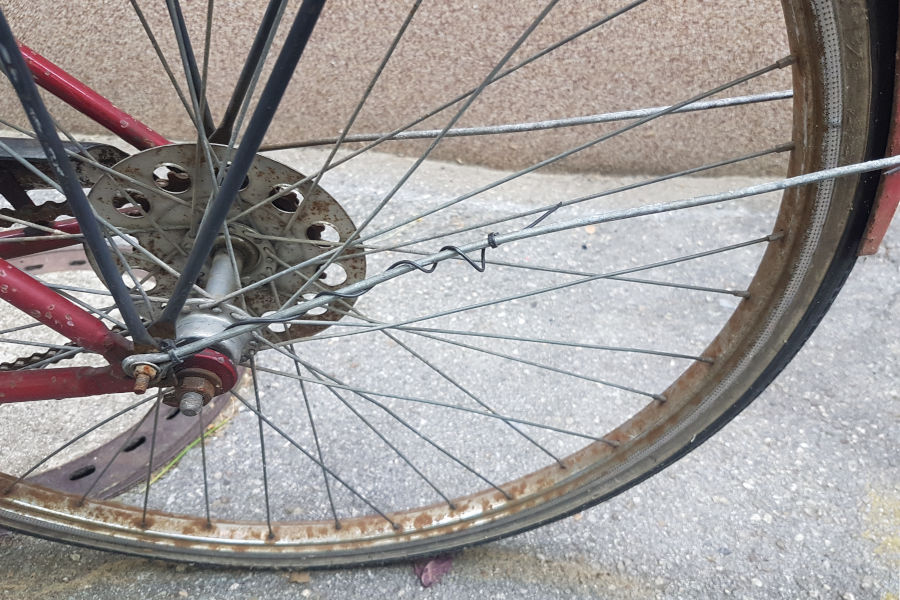 Rust can quickly deteriorate and damage your bicycle rims in a matter of days. If you notice discoloration or any of the telltale signs of rust, you should do your best to remove it right away. Moisture and oxidation are the primary causes, so preventative measures can be taken to stop future rust from showing up.

To remove rust from bike rims and spokes, start off by using an anti-rust spray and follow it up with a crumpled ball of tin foil dipped in warm water and soap. Scrub off the surface with the solution until all of the rust is removed. Make sure that you dry the rims completely before you store the bike.

Throughout this article, you’ll also learn the following information about rusted bike spokes:

Getting Rid of Rust on Bike Rims and Spokes

Start off by using an anti-rust spray to remove the surface layer. I recommend the WD40 Specialist Penetrant Spray. Apply a thin layer of the liquid solution on all areas of the spokes that are affected by rust. Allow it to sit for about 30 seconds, then wipe it off with an abrasive sponge or steel wool.

Anti-rust spray is known for being quite strong to breathe. Wear safety goggles, a mask, and a pair of gloves to prevent accidental ingestion. You can also choose to use the tin foil tool created in the next section, though it won’t absorb the spray as well.

Create a Scrubber With Tin Foil

Grab about one foot of tin foil or aluminum foil and crumple it into a dense ball. It needs to be as tight as possible to make it so it won’t unfold when you’re using it. Tin foil and aluminum foil are both the best choices because they’re abrasive enough to remove rust without scratching or damaging your bike’s rims.

If you don’t have access to tin foil or aluminum foil, use steel wool, as mentioned in step 1. Just as it is with this step, you need to crumple the steel wool to make it tight and dense; Otherwise, it’ll loosen up and become useless.

In a small bowl, mix about 3 to 4 drops of dish soap with one cup of warm water. The water needs to be warm or even hot in order to loosen the rust from the surface of the bike rims. If you use cold water, you won’t be able to effectively treat the rust. The longer you leave rust on the spokes, the more damage it’ll do to your bike.

If you’re using bar soap or regular hand soap, you’ll probably have to use quite a bit more. Dish soap is concentrated, which makes it the most efficient product. You can also add a few drops of lemon oil to the solution. The natural acidity in lemon oil makes it corrosive against rust.

Scrub the Solution on the Rusted Areas

Take the ball of tin foil that you make in the previous step, dip it in the soapy water, and scrub it against the rusted surface. Start off gently, but slowly increase the applied pressure if you notice that the rust isn’t coming off. Although it’s unlikely that you’ll scratch your rims, some porous rust can make cracks that can be worsened by too much friction.

An alternative way to do this step is to pour the solution into a spray bottle and spray the rusted surface. Use the tin foil ball to scrub it away until the rust is moved. Repeat this process as many times as it takes to loosen and remove the rust entirely.

Leaving the suds behind to dry will cause even more issues by collecting pollen and other debris in the air. Rinsing off the solution with a garden hose is just as important as the rest of the step-by-step guide. You can also fill a bowl with clean water and dump it on the rims to remove the rest of the soap.

Take a microfiber cloth, such as the Mr. Siga Microfiber Cloths, and wipe away the remaining moisture on the bicycle. Don’t forget to touch-up the areas of the bike that weren’t cleaned but have water on them from the rinsing step. You can also use a few floor fans to accelerate the drying process.

Note: Never put your bike away until it’s completely dry. If you put it away early, it’ll form more rust, causing even more problems. When rusted areas are cleaned and gather another layer later on, it can weaken the metal and break much easier.

Is Rust Bad for Bike Spokes?

Rust is one of the most corrosion substances that can form on metal. If you don’t tend to the rust on your bike spokes, they can break apart, stiffen, and weaken very quickly. Rust also causes a serious health hazard that can’t be ignored. If you’re riding your bike and you get cut by rust, you’ll need to visit a hospital.

Another reason that you’ll need to remove rust is that it doesn’t look good. It breaks your rims and causes cracks, but it also looks ugly. Rust gets worse and worse until it starts to look chunky and red-orange in color.

Finally, you’ll have to buy a new bike if the rust gets bad enough. Remember that the best way to remove rust is to prevent it from happening. Store your bike in a cool, dry place that’s preferably out of direct sunlight. The weather elements can cause more damage to your bike than most other issues.

If the rust gets too bad, you might have to get new rims. For more info about signs to look for and how long rusted rims can last, proceed to the next section.

When Should You Replace the Rims?

Under proper conditions, bike rims can last up to 15,000 miles. Keep in mind that the estimation applies to high-quality rims, but it’s still a direct representation of how long they’re supposed to work.

That being said, rust can shave years and thousands of miles off of your rims’ life expectancy. Neglected rust can and will eventually bend or break the spokes of your bike. You’ll notice that they might only last up to 1,000 miles or less if you leave it out in the rain too often.

If you notice any cracks in the rims, you should replace them. Broken rims and spokes can bend over in the middle of a ride, causing serious injury. It’s not worth risking, so do yourself a favor and replace them. Better yet, clean or prevent the rust before it becomes an issue!

Removing rust from your bike spokes will increase their lifespan while preventing possible injuries. It also looks much better when you’re cruising around town. Regardless of your reasoning, follow the steps found throughout this article to keep your bike rust-free for many years to come.