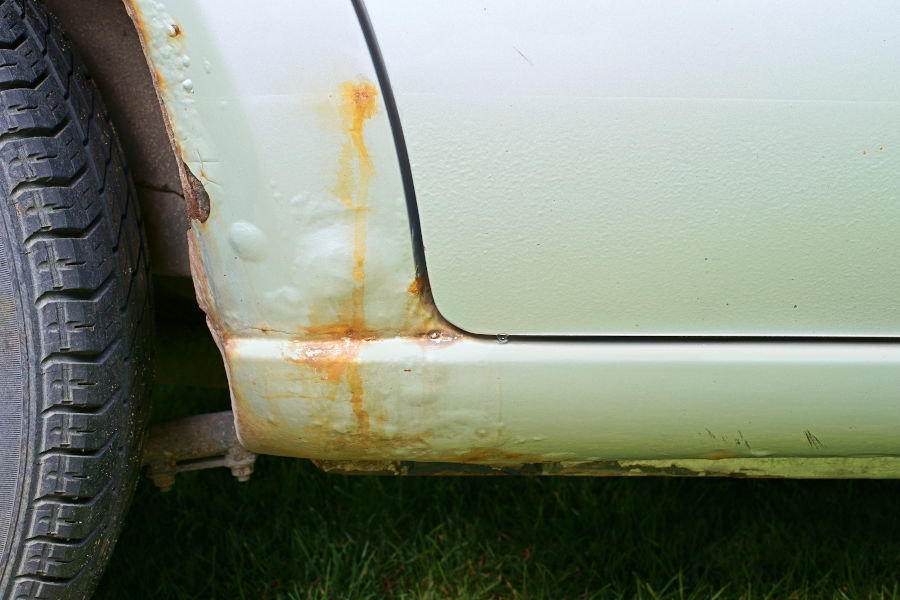 Rust is one of the most common problems professionals in the automotive repair industry encounter. It can quickly spread on the metal parts of your car and leave unsightly marks.

How fast does rust spread on a car? Metal begins to rust immediately if it is exposed to oxygen and water. Rust will become visible on the metal surface within a few minutes to several years, depending on environmental and metallurgical factors.

Rust can spread fast once the coating of your car is compromised. Even small rips on the chassis of your vehicle could cause rust to develop quickly. Car owners need to understand the different types of rust that can develop on their cars and how to prevent them.

How Fast Rust Spreads in a Car

Rust can spread quickly, provided it is exposed to water, salt, and oxygen in the environment. In general, rust can spread slowly if there is little or no exposure to water or moisture and oxygen. Rust can start developing on the surface of your car, provided the factory paint is broken.

The time it takes for iron to rust depends on many factors, including:

How Rust Affects a Car

Rust can depreciate the value of a car significantly. If it is not addressed early, rust can weaken the metal and destroy the integrity and functionality of a vehicle. Unfortunately, no metal on earth is rustproof. Though some metals corrode slowly than others, they tend to be expensive when used for vehicle assembly.

To reduce the cost of production, automobile companies prefer working with alloy metals. Since alloy metal is prone to rust, there are several ways to treat and protect it from corrosion.

Rust is a chemical process that occurs when metal, water, and oxygen mix. Iron, a popular raw material for vehicle assembly, is highly vulnerable to rusting compared to other metals. Pure iron does not rust as fast. However, a pure alloy is less tensile, flexible, and easy to mold when manufacturing vehicles.

Manufacturers combine the ore with other metals to form an alloy to make iron flexible for automobile production. Although this solves the problem of formability, it creates another issue of rusting. Alloying introduces impurities in iron, making it more vulnerable to rust.

Can You Prevent Rust?

Metal rusts in the presence of air and water. Therefore, you only need to protect the metal from these two natural elements to prevent rusting.

It is difficult to prevent metal from coming in contact with air and water. Automobile companies prefer coating metal with a chemical that slows down rusting. How fast this coating wears depends on how well you take care of your car.

This is the mildest form of rusting and the easiest to fix. Surface rusting forms when the protective layer that coats metal is compromised. A scratch or crack on a car’s surface can expose the underlying metal.

Rust will form on the exposed part but will not penetrate the metal. Surface rust usually affects pure iron. However, if the affected surface is made of cast iron or any other iron alloys, the rust will penetrate further into the metal because of impurities.

This is the second stage of rusting. Bubbles of rust form on metal and start to flake away if not fixed. Scale rusting often goes undetected. Nevertheless, this type of rust will eat away at the metal and reduce its strength.

How fast scale rusting spreads depends on a few factors:

The thicker the metal, the slower the rate of scale rusting. The car’s outer body is made of thin metal, which rusts faster compared to the chassis made of heavy metal.

Scale rusting also depends on the type of metal alloys used. A combination of iron and carbon speeds up the rusting process. Vehicle companies use chromium and nickel to make car parts because of their slow rate of corrosion.

A saline environment accelerates scale rusting. Salt and other impurities form electrolytes when dissolved in water. The electrolytes speed up rusting at the molecular level, which is why cars in coastal towns tend to rust faster.

Metals are heat-treated to refine them before use. Repeated heating of steel alloy refines the metal but also makes it more prone to scale rusting.

This is the last stage of the rusting process. Penetrative rusting happens when metal is exposed to corrosive elements for a prolonged period. As the name suggests, penetrative rust penetrates the metal and forms visible holes. At this point, the damage on the car is irreversible and total metal replacement is required.

Automobile companies are aware of the intense damage penetrative rusting causes. As a solution, vehicle manufacturers are opting to mix aluminum and magnesium with iron.

Magnesium and aluminum are ideal for vehicle assembly because they are more resistant to penetrative rusting. The major drawback of the two metals is they are expensive and will increase the cost of production.

How You Can Stop Rust From Spreading On Your Car

Although corrosion is inevitable, you can stop rust from spreading by:

Cars are built with a protective layer on the chassis to prevent the spread of rust or corrosion. However, the protective coating is compromised when salt and road grime accumulates on tires.

Always wash under your car thoroughly, including the tires to stop rust from spreading into the interior of the vehicle. In addition, wash your entire car regularly. Check the drain holes on the doors and rocker panel to ensure water does not accumulate in them.

Wash your car at least two times per week to prevent rusting. In addition, leave your car out in the sun to dry completely. Waxing your car adds a protective layer to the paint, which minimizes the chances of rusting.

Tips for Getting Rid Of Surface Rust

Surface rust may not be a threat, especially if it happens on thick metal. However, it can spread quickly if it occurs on metal cracks. Fortunately, you can take several steps to prevent surface rust.

First, mask the area you are working on with poly sheeting to protect the rest of the car from paint spills. Sand through the rust until you see bare metal. In addition, sand around the affected area to create more space for feathering edges.

Break any paint blisters or rust bubbles with a scrape. Smooth out the surface with 40-grit sandpaper. Apply an epoxy primer to create a firm bonding surface on metal. Two to three medium coats will do.

Apply the base color coat. Spray from a distance of 12 inches for an even spread. Fix the sags on the applied paint with sandpaper. Re-spray the area and leave to dry.

Apply several layers of clear coat, leaving room for drying between coats. Use a microfiber or a piece of cloth to hand buff the restored surface. Wax the car at least 30 days later. For a full guide on how to remove surface rust from a car check this article.

How to Fix Scale Rust on Your Car

Scale rusting requires more work to fix than surface rust because it affects the underlying metal. First, scrape at the rust holes with a wire brush and then grind the surface to level the rust scales or bubbles down.

Smooth out the surface with sandpaper before applying primer and buffing it altogether.

How to Fix Penetrative Rust

This is a job best left to professionals. The bubbles of rust have flaked away at this stage, leaving behind gaping holes on the metal.

The solution is to replace the affected metal completely. Alternatively, you may weld patch panels on the affected areas to stop rusting and restore the car’s aesthetics.

Remember, penetrative rust affects the performance of a car. If you do not trust your DIY fixing skills, then take your vehicle to a repair shop.

A mechanic will fix the rust and inspect the car for any other signs of rusting. Vehicle repair shops have advanced equipment for testing the integrity of the car after fixing rusted metal.

2 thoughts on “How Fast Does Rust Spread on a Car?”