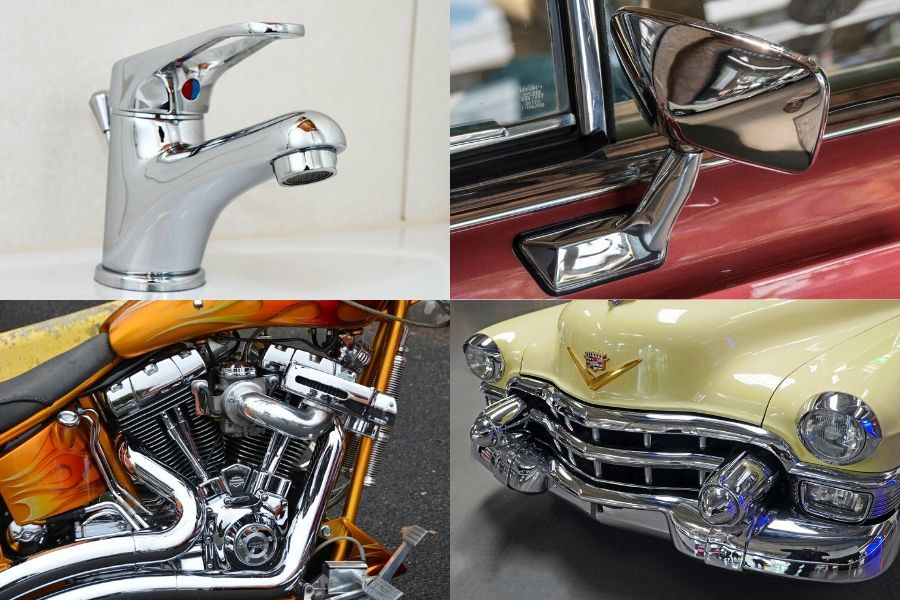 Chromium is a shiny, transitional metal element used to give alloys extra strength and protection against rust. However, chromium can appear to corrode just like the metals it protects. Chrome (the metal, not the Google browser) is a metal that is valued for its many useful properties. While some metals are valued for their strength and durability, chrome is utilized for its shine and rust-resistant properties.

This makes one wonder if chrome can rust at all? The answer to that is no. Chrome cannot rust because only iron is subject to rusting. However, certain factors can make chrome corrode.

In this article, we will cover the following:

Chrome is a metal, but it is not a metal that can be subjected to rusting. Read on for more information on why chrome cannot rust but can appear to corrode under certain circumstances.

The Composition of Chrome

You can find chromium anywhere you look. It’s in cars, furniture, buildings, decorative objects and more. It is a glistening silver-white metal that has a smooth finished appearance when polished.

Chrome is a shortened name for chromium, the element it comes from. Chromium is usually mixed with metals like iron and nickel to form stainless steel. Chromium is called chrome when it is used to plate other metals or plastics.

The Properties of Chromium

Chromium is mined from chromite ore. Unpolished, chromite has different variations in its look and color. Some chromium look like dark grey rocks while other forms have slivers of silver or white lines and specks on them. Chromite ores come in platinum, green, brown, black, and other colors.

Chromium can be used to coat other materials through a process called electroplating.

Electroplating is done by sending an electric current through a water solution that contains a metallic compound. Electroplating chromium helps the ions of chromium stick to the metal that it is being attached to. Chrome can be electroplated over metals, such as nickel, to help strengthen them and give them a protective layer.

Chrome can be used as a coating for plastics, but only after the plastic is coated in another metal, like nickel or copper. This process just works for rigid plastics because rigid plastics can resist the formation of stress fractures during electroplating. Items that may have chromium electroplated onto them include car bumpers, showerheads, silverware, chairs, and other materials composed of metal or plastic.

Besides being shiny, chromium has another property that makes it great for mixing with other metals: it cannot rust. When added as another component to alloys, its rust-resistant properties extend to the whole alloy.

Its unique properties are partly due to the way it reacts with oxygen.

This chromium oxide barrier is extremely hard. It retains its shiny properties and gives alloys, such as stainless steel, an additional shine to its appearance.

Rusting is a process that affects only iron; chrome is impervious to the process.

When oxygen and water react with the metal iron, they create a product called rust. Oxygen and water work to remove the electrons from iron, and as these electrons are removed, the iron changes to rust. Rust is a weaker form of iron and flakes away, leaving the iron underneath exposed and vulnerable to rusting. The rust cycle repeats until there is either no more oxygen, water, or iron left to continue the reaction.

This is where chrome becomes such a valuable metal for alloys such as stainless steel. The chromium prevents the iron in stainless steel from rusting because of the protective barrier. Since iron is the only metal that rusts, the chromium oxide barrier protects the iron and prevents rust from ever forming on it. Therefore, alloys that have iron and a sufficient amount of chromium do not rust.

However, if the oxide barrier is compromised, then water can get through and react with the iron. While the barrier is resistant against moisture, it can be removed by certain chemicals.

The chromium oxide barrier is not invincible. It can be removed from a stainless steel surface by chemicals such as chlorine. Corrosions can occur to the chrome when it is improperly cleaned or exposed to these damaging chemicals.

If there are cracks or holes in the chrome plating, then the corrosive liquids can make contact with the metal bonded beneath and corrode the metals from the inside. Once inside the alloy, these acids melt down metals like iron and nickel.

This process removes the metals that support the chromium on the surface. The chromium no longer has anything underneath it to support itself and falls off the weakened alloy. This gives the chrome the appearance of having holes or pits underneath it, even though the chrome itself is fine.

Steel wools or carbon wools can inadvertently damage alloys with chromium in them. These wool cleaners are made with metals that can crack the chrome plating of the alloy and expose the iron underneath. These cleaners can also leave behind small deposits of steel or carbon that cling onto the alloy and begin to rust. This causes the exposed iron to rust with the metal deposits and form rust on the alloy’s surface.

The aluminum foil removes rusted iron from plated chrome by taking the oxygen away from the rusted iron, quickening the rusting process. Aluminum foil is not as hard as metallic chromium and cannot leave any scratch marks on the chrome. Once the rust is gone, the chromium oxide barrier will cover the areas where the rust was. Adding chrome wax helps to protect the chrome.

For more information about cleaning rust from chrome, check this article.

Chrome is a metal used for decorative purposes and adds an extra shine to objects, but it does not rust like iron.

Iron is the only metal known to man that rusts because of the way it interacts with water and oxygen. Chromium only reacts with oxygen to create a barrier called a chromium oxide barrier. This barrier protects the iron that chromium is mixed with or plated over, from rusting.

If the chrome plating is damaged by rusted iron, try using aluminum foil, to clear it up. Left alone, the chromium oxide barrier will restore itself.