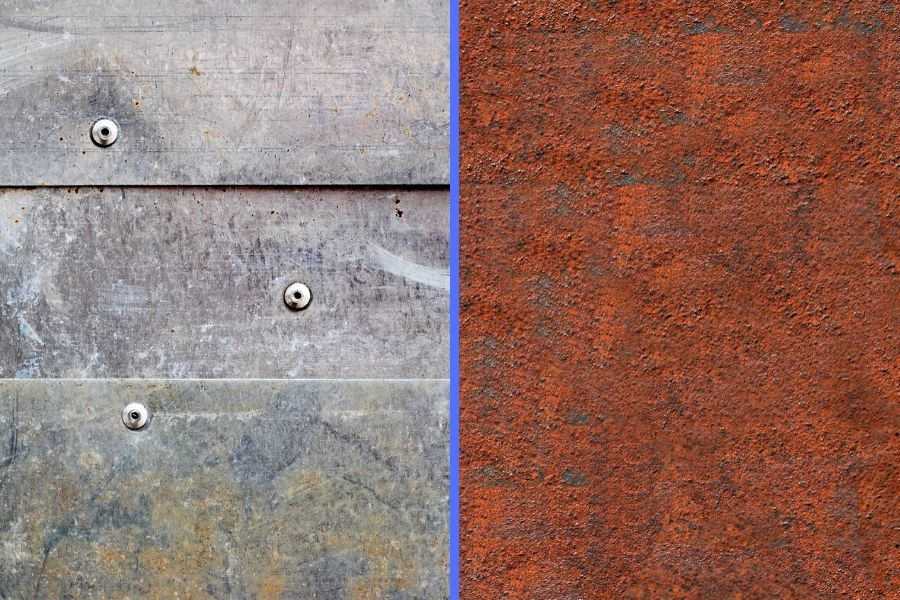 Think of the word you use to describe deteriorating metal at shipyards and old construction sites. Do you say that it’s corroded or rusted? Or maybe you use these two words interchangeably? If you do, you aren’t the only one — since terms corrosion and rusting denote a similar chemical process, many people believe they are synonyms.

However, that’s not the case. There are a few key differences between corrosion and rusting that you should be aware of. And that’s exactly why I’m here — to teach you what those differences are and how to treat your metal correctly.

In its natural state, metal is never as pure as the one that you usually see in trains, cars, or buildings. Before it’s actually ready to be used in industry, metal has to be extracted from ores and purified. The result is refined metal, which is the kind you encounter the most.

But refined metal has one fatal flaw — it’s much more unstable than its crude counterpart. Thus, when it comes in contact with the environment, it reacts and begins to convert into its more stable forms. Depending on what the metal reacts with, it can produce oxides, sulfides, or hydroxides.

Typically, metals corrode because they react with oxygen or sulfates, but chemicals are the occasional culprit as well. Corrosion can be rather slow and last several months or years, or it can happen much quicker. That usually depends on the type of metal in question and its environment. When the air is humid, or metal comes in contact with water, corrosion occurs much faster than otherwise.

The reason for this is that water is a key ingredient of the electrochemical reaction that leads to corrosion. Water provides oxygen to metal, which reacts with it and behaves like an anode, releasing electrons. These electrons then flow through water to the cathode part of metal, sweeping some of the anode metal along. Thus, corrosion occurs at the anode, where no metal remains.

Do All Metals Corrode?

While most metals do deteriorate with time, there is a group — the so-called Noble Metals — which is resistant to corrosion. These metals include gold, silver, platinum, rhodium, and palladium, and they are also the only metals that need no extraction or refining. Simply put, they exist in nature in a pure state. That’s why they’re usually quite valuable.

More surprisingly, some metals actually benefit from corrosion. Such metals are called passive metals, and the most famous representative of this group is aluminum. It’s quite reactive, so it oxidizes quickly — but once it does, an oxide film forms on the surface and prevents further corrosion.

And finally, in some metals, corrosion is induced on purpose. You may be asking yourself why anyone would want corroded metal. The answer is quite simple — for aesthetic purposes. When metals such as copper corrode, a patina in beautiful shades of green and blue forms on their surfaces. Induced corrosion is sometimes called patination, and it’s used in architecture — on roofs and monuments.

Now that you know what corrosion is, it will be much easier to understand rusting. Simply put, rusting is a type of corrosion. But while corrosion is a deterioration of all metals, rusting is a reaction between iron and oxygen, which is mediated by water.

Here is how rusting occurs:

Oxides and hydroxides of iron that remain after the reaction are called rust. Rust is typically brown or reddish, though there are such variations as green rust when iron reacts with sulfates or chlorides. Unlike patina, rust is rather flaky and doesn’t protect deeper layers of iron.

As you have seen, some metals are resistant to corrosion, while others benefit from it. With iron, this is rarely the case. There are certain types of “stable rust” which can protect iron in conditions of low humidity, but this is nowhere near as effective as aluminum’s oxide film.

How to Protect Metal From Corrosion

Your tools, fences, vehicles, and pipes are made from metal or metal parts. As time goes by, if you do nothing, corroded metal breaks down, leaving you no option but to replace it. That’s precisely why you need to know how to prevent corrosion and keep your metal parts intact. Luckily, that isn’t too difficult — with just a few extra precautions, you can save both your metal tools and your wallet.

One of the most common ways to prevent corrosion is by applying a protective coating. This coating acts as a physical barrier between the metal and oxidizing elements. Usually, a thin layer of zinc is added to protect the metal in a process called galvanization.

But even with a protective layer, it’s important to keep metal parts stored in clean and dry places, and monitor them carefully. Don’t expose them to water and control the environment with which they come in contact. If, despite your best efforts, water does end up on metal, always carefully wipe it away. And don’t let any scratches on the coating escape your notice — even the smallest ones can lead to corrosion.

How to Remove Rust

A few splotches of rust don’t have to spell doom for your tools and utensils. There are a few tried-and-true ways of removing it that guarantee your tools will look brand new. Even better, you don’t need to buy any chemicals or cleaners — you only need a few simple household items!

I recommend these four easy and natural solutions:

In case you need more ideas on how to remove rust, or if you need a visual demonstration, check out the video below. And if you don’t care much for homemade solutions, here is a chemical rust remover that might be just what you need.

Corrosion and rusting are similar, but not quite the same. They both lead to deterioration and eventual breakdown of metals — the main difference being the type of metal they affect.

Prevention is better than cure; so take good care of your tools. It will save you a lot of trouble, energy, and money.