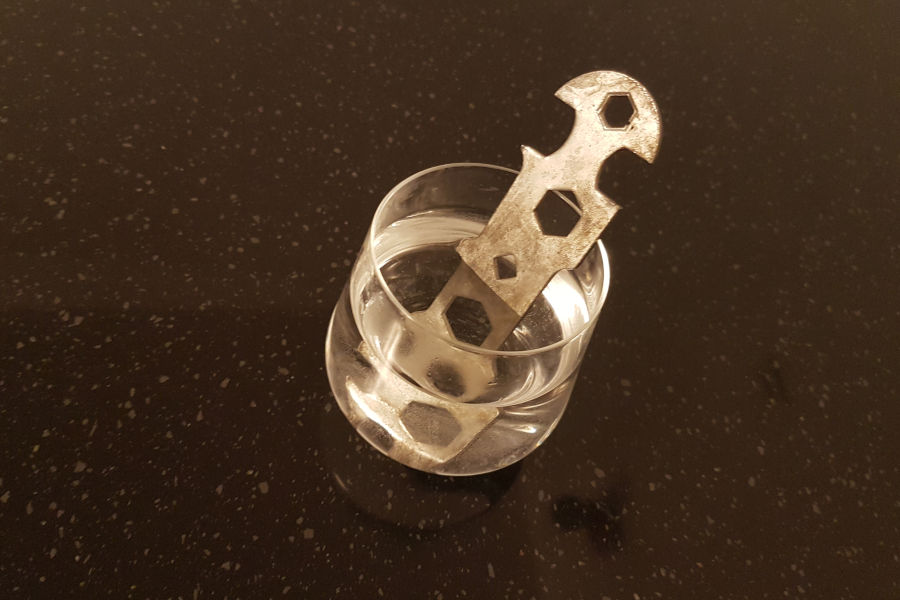 Being the most abundant of all metals, iron is all around us. It’s in our bodies, the materials we use every day, and it’s even what makes up our Earth and stars. Depending on the environment iron is exposed to, it can be affected in numerous ways and have positive as well as negative results.

Iron will rust when it comes into contact with water. Rust forms when metals like iron come into contact with outside factors such as water and oxygen. These factors will exhilarate the process of iron oxidation, especially if the iron materials are always subjected to them.

In this article, we’ll be going in-depth into why iron rusts in water, as well as how you can treat iron that has been tarnished by rust. If you’re interested in learning more about these subjects, keep on reading.

Why Does Iron Rust in Water?

As stated above, iron will rust when it comes into contact with water.

Depending on how often iron is subjected to water, as well as what kind of water are all factors into how fast rust can form, as well as how severe the build-up of rust is. Iron that is subjected to more water is more likely to begin corroding faster, therefore rusting faster.

The type of water also has an impact on how iron reacts. Liquids such as salt water and acid rain speed the process of rusting on iron, compared to liquids like pure water.

Hopefully, now you have a better understanding of how iron is capable of rusting in water. Not only does the amount of water play a role in the speed of rust build-up, but the kind of water iron comes into contact with also plays a factor.

Below, we’ll explore some of the ways you can treat tarnished iron that has been affected by rust.

How to Clean Rusted Iron

Above, we explored how elements like water can create rust on iron. Rust can cause a reddish-brown color to appear on your iron surface, and sometimes you’ll even see the color green show up.

If you keep an eye on it, you can catch rust early before it builds up and can potentially damage the iron. Below, we’ll explore multiple ways you can clean iron that has been affected by rust.

You can use this product on any iron or steel product, and it’s an easy way to say goodbye to rust in just as little as five to ten minutes.

As long as the iron has rusted too deeply, simply taking a piece of sandpaper to your iron surface will do the trick. As long as you use the sandpaper gently, you’ll be able to successfully remove any unwanted build-up without damaging the material.

Even if your iron has begun to rust deeply, it’s a good idea to go in with sandpaper first before using other methods, that way to eliminate the excess rust on the surface.

Looking for a common household item to eliminate rust from your iron? White vinegar is a great choice, as it’s acidic enough to rid your iron surfaces of stubborn rust.

It’s also a good option if you’re looking to tackle smaller objects, like jewelry, for example. You can easily soak smaller items into a bowl of white vinegar, but make sure to rinse off your materials afterward, as the vinegar can potentially damage the surface if left on too long (more info on using white vinegar).

Looking for another option that you can find in your kitchen to eliminate rust? Lemon juice is another great choice, as it’s similar to white vinegar in that it’s acidic.

If you choose to go this route, you’ll need salt as well. First, you’ll need to rub salt on the infected, rusted area. After this, squeeze your lemon juice onto your iron surface.

If you’re trying to treat a large and very rusted area, let it sit for two hours, and then wipe off and clean the surface. If the rust has taken up a small surface and has not spread too much, 10 to 15 minutes in lemon juice and salt will also get the job done.

In this article, we discussed how iron is capable of rusting in water. We know this is because factors like water and oxygen cause metals like iron to corrode and build rust.

We also learned that the amount of water iron is subjected to plays a role, as well as the kind of water it makes contact with. For example, iron that is exposed to salt water every day is more likely to rust faster than iron that does not come into contact with water.

We also explored multiple ways you can combat rust on your materials, such as basic store-bought rust removers, as well as using your household supplies such as white vinegar.

Hopefully, now you have a better understanding of how factors like water affect iron, and what you can do to keep your iron materials shiny and rust-free.