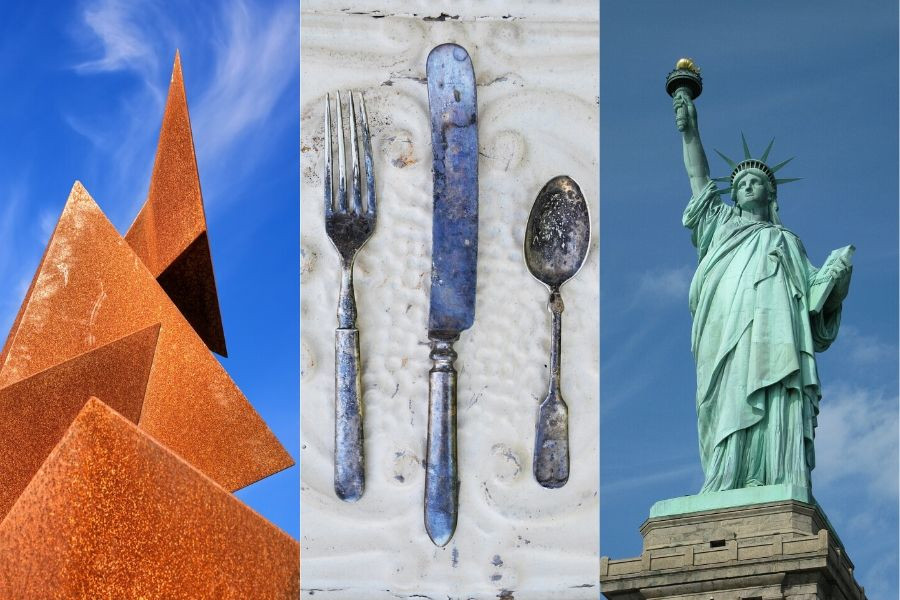 Whether you’re fixing discolored surfaces or trying to achieve a certain cosmetic alteration, there are plenty of chemical processes associated with common household metals. Rust, tarnish, and patina all have numerous differences that can make doorknobs, tables, windchimes, and many other items look completely changed.

The differences between tarnish, patina, and rust are that rust is never an intentional occurrence, tarnish forms a glowing bronze tone on a few types of metal, and patina is a type of tarnish that usually shows up copper. Some homeowners use paint to make their metals show a tarnish or patina.

Throughout this article, you’ll also learn the following information:

How Is Rust Different From Tarnish and Patina?

As mentioned above, tarnish, and patina are very similar. Patina is simply a form of tarnish, which makes it the same thing in a sense. Rust is the outlier of the group since it’s formed through a separate process and with different types of metal. It’s also quite a bit more dangerous in most situations.

Below, you’ll find the five main reasons that make rust, tarnish, and patina so different from one another:

As you can see, there are several differences between these three substances. You might be chasing the aesthetic or trying to get rid of it, but they’re all unique in their own ways. The key takeaway from this section should be that rust is never a good thing, but the others are great when controlled.

What Causes a Tarnish?

Oxygen and sulfur dioxide are the two primary non-metal compounds that cause tarnish on metals. When they interact with one another, the result is a slight deterioration paired with a strong color adjustment.

Metallic abrasion is a common cause of tarnish as well. When the metal surface, such as a ring or necklace, is rubbed against another surface, it starts to chip away. It breaks the outer portion of the metal, making it quite a bit weaker than it normally would.

Remember that there are certain chemicals found in modern makeup that can cause your jewelry to tarnish as well. It could be a result of your earrings resting on the side of your face or makeup touching and coating your necklace when you remove it. Whichever cause may be, non-natural makeup is the enemy of silver, copper, and brass jewelry.

If you’re trying to remove tarnish from your jewelry, try Flitz Brass and Copper Remover. It’s inexpensive, and the whole process is quite quick. All you have to do is spray on the solution, let it sit for 30 seconds, and wipe it off with a clean cloth or sponge.

Some people prefer to intentionally create a tarnished appearance. If you’re in that boat, then you’ll be pleased to find out how easy it is. The only way to start a true tarnish is to wait. That’s right; time is the only way. Adding a little bit of white vinegar to the surface might help as well.

However, if you want to make an artificial tarnish, there are plenty of different types of paint. You could also combine forest green, light brown, and copper-tone paints to mimic the appearance of tarnishing without altering the chemical compound of the metal.

As mentioned in the introduction, a patina is a type of tarnish. It usually occurs on copper-based metals, but when it comes to coins, the process is known as toning. It’s caused by all sorts of compounds, such as oxides, sulfides, carbonates, and so on.

Most surfaces that are exposed and changed to patina include:

Truthfully, patina, tarnish, and toning are all different types of the same process. The only notable difference is that the colors are a bit unique from one another, and the materials that they form change the names.

If you’re worried because metal around your home started to turn green, red, orange, blue, black, or another color that it isn’t supposed to be, then figure out what the metal is. Aluminum won’t rust, which means it’s either patina, tarnish, or calcification. Any of these three processes can look similar to rust.

Also, rust is grouped together in large blots, whereas tarnish and patina usually cover the entire surface. Rust typically eats away at the metal, leaving cracks and indents. Sometimes, it shows up as a few clusters of rusted dots.

All types of tarnished metal can be polished, shining the highlights to make it look much more visually appealing. Old, lumpy tarnish can be a bit ugly to look at. When you polish it, you’ll achieve that vintage, antique appearance.

Note: Patina, tarnish, and rust are all avoidable if you don’t want them to show up. Never let moisture settle on metal for too long, and make sure you clean the surfaces regularly. Use a metal disinfectant, such as Mr. Clean Freak Deep Cleaning Spray, to get the job done.

Although they are often mistaken for one another, rust, tarnish, and patina all occur under different circumstances. Close examination will show that they have unique colors, textures, and chemical compounds that cause them.

2 thoughts on “What Are the Differences Between Rust, Tarnish, and Patina?”