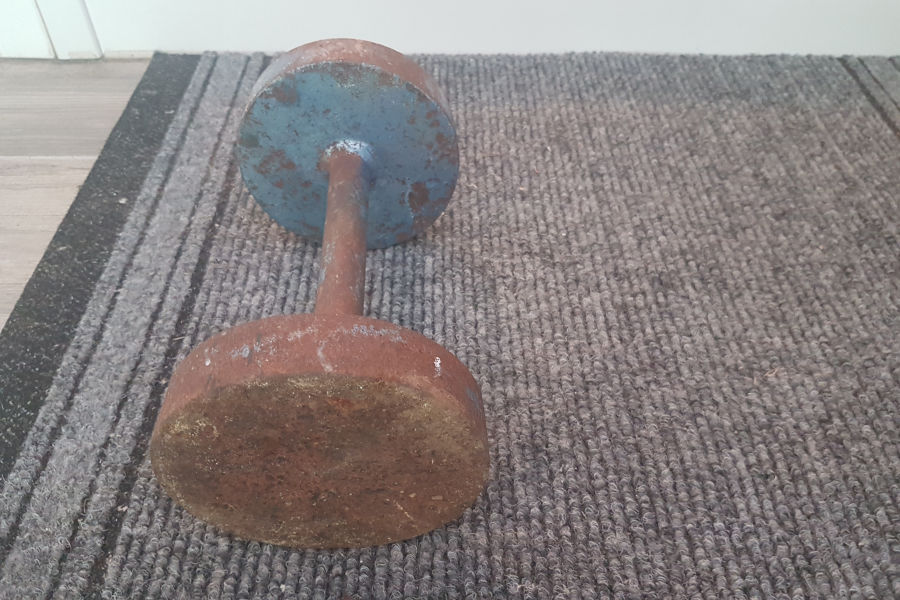 Anything can stain a carpet, from juice to soot, and some stains are more difficult to get rid of than others. Rust stains are the perfect example; not only do they stand out because of their reddish-brown hue, but they tend to linger there longer than others. And unlike other stains, you can’t exactly do away with rust spots that easily.

As someone who has had to deal with rust stains myself, I decided to provide you with a list of different ways to remove rust stains from carpets. Most of them will cover fresh, immediate staining, but these methods also apply to removal of old, dried rust spots.

Rust is a reddish-brown iron oxide that forms by the reaction of oxygen and iron when water is present. When an iron object starts to corrode, a thin layer of rust forms on the surface, which is flaky and easily friable. Should we leave a metal object alone and enough time passes, it will inevitably turn to rust completely.

How Do We Get Rust Stains on Our Carpets?

To someone who has never had to deal with rust stains, the whole topic might seem strange. After all, a typical modern carpet is made of yarn ( usually containing nylon or polyester fibers) and polypropylene, and none of those materials rust. So, unless we’re walking on an extremely thin layer of iron or steel, how do we get red and brown blotches on our carpets?

By far, the most common way rust can stain a carpet is through contact with an iron object. For example, you might have a lamp with an iron stand, or a table that stands on iron feet. In addition, some furniture contains metal elements that can rust over time; though they might not come into direct contact with water, they’re still exposed to air moisture, which can also cause rusting to occur.

If an iron object is in direct contact with carpeting for a while, some rust spots will definitely appear. One major issue is that people tend not to notice these stains until they’ve dried up, which makes them harder to remove. But it is possible to actually “make” a fresh rust stain. For instance, if you have a leaky roof and water accumulates inside of recessed lighting on your ceiling, it can mix with the rust particles and drip onto the carpet.

The Initial Process: Scraping the Rust Away

Every single rust stain cleaning starts off the same, so I think it’s instructive to talk about that process separately. Before you begin applying any solution to your carpet, you need to see if some of the rust will come off right away. In other words, you need to try and scrape off as much rust from the carpet as you can.

Usually, I try to do this with a butter knife, but some people use spoons, forks, and other pieces of cutlery. The process is pretty straightforward: take the butter knife, start slowly scratching the stain with the blade, and observe where and how the rust particles accumulate. Once you’ve removed enough of them, vacuum the flakes up with a hoover.

Scraping with a butter knife or a spoon won’t cause too much damage to the carpet. However, that doesn’t mean that you should rush the process or apply more pressure than you normally would. Remember to scrape slowly and to be careful about how you do it. One wrong move and you can make a rip in the carpet, which is a far bigger issue than a mere stain.

There are several ways to remove rust stains from carpets, but quite a few have one common element to them. Namely, if you want to get rid of rust, you’ll need some form of acid.

Acidic solutions tend to break down both rust AND metal, forming iron chloride in the process. However, if you were to use acid to remove rust, but keep the metal intact, all you have to do is dilute it; the dilution will also make the acid fabric-friendly. Some of the methods I’ve listed below contain some form of diluted acid, so you can rest assured that they won’t damage the carpet further when you’re getting rid of the rust spots.

After scraping off some excess rust, you’ll need two cups of warm tap water and a tablespoon of any commercial dish soap. I suggest using clear dish soaps, since they have no artificial dyes that can stain the carpet further.

When you mix the water and the soap, use a sponge and blot the stained area repeatedly. After the mixture has soaked into the carpet enough, leave it for around 5 minutes. Finally, use a clean, white towel to soak up the excess water. You’ll want to blot the stain with the towel for as long as the rust transfers onto the towel’s white surface; once there’s no more rust transfer to the towel, you’re good to go.

Sometimes, dish soap isn’t enough and you need something more potent. Try mixing a tablespoon of household liquid ammonia with two cups of warm water. Most household ammonia cleaners are already clear, so you’ll have no trouble finding one for your rust spot problem.

The process itself is the same as the one in Method 1. The only real difference is that ammonia has a distinct smell that can be off-putting to some. If you don’t want the scent to linger, try adding a bit of lemon juice into the mixture. One tablespoon ought to be enough.

And while we’re on the subject of lemons…

Yes, I stress that these are lemon juice solutions, plural. The first solution involves lemon juice and sea salt, though regular table salt will also suffice. You can either pour the juice onto the stain and then add salt to the soaked area or mix them both and use a sponge to blot the stain with the mixture. Either process works fine, so once you’ve applied the mixture, leave it to soak for a few minutes.

Your next step is to pour hot water onto the stain; two cups should do fine, but you might need to apply more if it’s a large stain. Blot up the liquid with a clean, white towel and keep blotting until the stain is gone.

The second solution involves a mixture of vinegar, lemon juice, and salt. Take a bowl and mix a tablespoon of salt, two tablespoons of lemon juice, and a cup of clear vinegar. Next, apply the mixture to the stain and let it soak for two hours. Once the time has passed, blot the stain with a clean, white towel until it’s gone.

Of these two, the second method, in particular, is perfect for old carpets and for dried up, stubborn rust stains. On the other hand, the first method works best when the stain is fresh; however, I know from personal experience that the old, crusty stains will eventually disappear with the first method as well. You just need to be patient.

Hydrogen peroxide is quite powerful, so I suggest testing it on a patch of fabric to see if it’ll bleach it. Of course, you won’t be using the pure substance; mix a tablespoon of hydrogen peroxide with three cups of warm water and dilute it well. Next, apply it to a rust stain and leave it there for at least 30 minutes. The rest of the process should be familiar enough by now — blot it with a white towel and keep doing it until there’s no more liquid and the stain is gone.

Naturally, the methods listed above are not the only ones out there. For instance, I’ve heard a few people talk about using other options to remove rust stains, such as CLR or WD-40. And while I can definitely see the benefits of using them, I have to stress that, just like hydrogen peroxide, they might bleach the carpet if they’re too potent. Therefore, I suggest testing them on a patch of fabric before trying to remove the rust blotch.

Most people get irritated when they see a rust stain because they immediately think of professional carpet cleaning. To be precise, they dread the process of removing the heavy carpet and hauling it off to a cleaner. All of that hard work, just because there is a little brown spot that won’t come off.

Of course, I fully support using professional carpet cleaning services, especially if you have some particularly stubborn stains. But I also completely understand why you might want to try a DIY solution first. So, do you want to save some carpet cleaning money? If so, feel free to use any of the methods I listed above and watch that brown patch slowly dissolve into nothing.