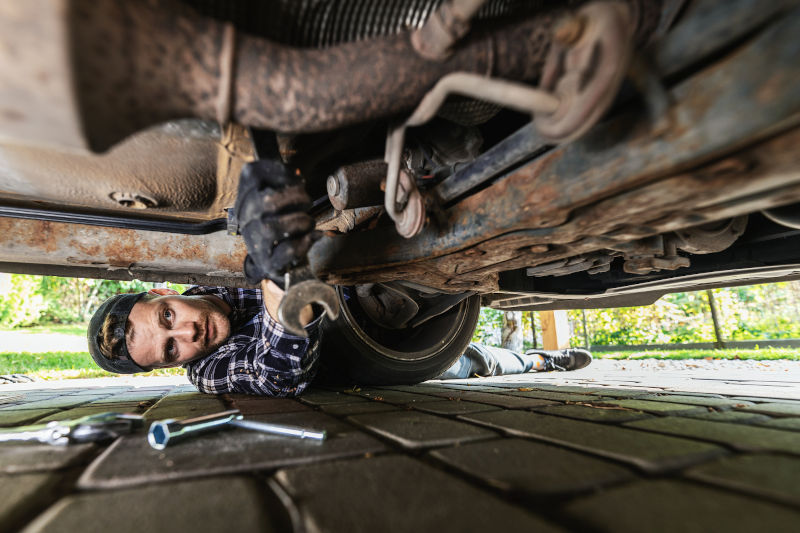 Constant exposure to natural elements will cause your car’s metal body to rust. It’s essential to treat rust immediately because it can degenerate to create holes and compromise your car’s structural integrity and resale value.

You can remove rust from your car’s undercarriage in seven easy steps:

Let’s discuss each step in detail.

Since you’ll be working with your car’s undercarriage, you’ll have to access it from beneath. So, you’ll have to raise the vehicle using a car jack, usually kept in your trunk.

If you’ve never used a jack before, the idea can overwhelm you, but it’s pretty easy. Watch this video to learn how to use a jack without hurting yourself or your car.

You can now crawl underneath to inspect the undercarriage after raising the car to a height that’s good enough to grant you comfortable access. It should be visible in daylight, but if the vehicle’s position is blocking the sun, you can use a flashlight for more illumination.

Rust appears as brownish coloration on metal surfaces; this color indicates the presence of iron oxide, the product of the chemical oxidation of iron. Iron is usually the main component of a car metal body, sometimes alloyed with steel.

However, there are three stages of rust in metal which include:

The surface stage is what it is: rust on the surface. Surface rust breaks down paint coating, exposing the bare metal to corrosion. If left untreated, the rust will degenerate to the scale stage.

At the scale stage, the rust goes deeper than the surface. The paint coating is gone, and the bare metal becomes weaker. In addition, scale rust compromises the structural integrity of the metal.

Untreated rust at the scale stage will grow into the penetration stage. The rust has penetrated profoundly at this stage and degraded the metal to an unusable state. Holes may appear, and some parts may break off.

3. Use Sandpaper to Remove Surface Rust

Surface rust is easy to remove. Use sandpaper to brush off the broken paint coat until the bare metal becomes visible. You can use 50 or 100-grit sandpaper.

Wear a nose mask to avoid inhaling specks of rust dust. Go easy on the car at this stage – you don’t want to wear off more than necessary.

4. Use a Wire Brush To Remove Scale Rust

At this point, using sandpaper alone will not suffice. After brushing the surface with sandpaper, use a wire brush to brush further until you see bare metal.

Ensure you brush through every corner so you don’t miss some spots. Take care not to brush non-rusted parts of the undercarriage so you don’t cause more damage than necessary.

5. Cut Off Corroded Areas and Mend With Metal Panels

At the penetration stage, the metal would usually need welding or replacement. Map out affected parts and examine the level of damage. While you may choose to weld some pieces into place, you may completely cut off some parts.

Replace these parts with new metal parts or panels. Weld them together and smoothen the welds to get a fine blend of old and new. You may need to take your car to a body shop as you may not have metal cutting or welding tools.

After getting rid of the rust on your car undercarriage, you may also need to check for wax and grease. You’ll need a towel and wax and grease remover to remove them if present.

I recommend this Car Guys Hybrid Wax Remover (available at Amazon) if you’re unsure of what to buy. It is simple to use and lasts a long time, and it will keep your car looking glossy.

The steps above will go far in eliminating rust from your car’s undercarriage. However, it’s unlikely that you’ll ultimately get rid of rust. There will likely be a few spots with specks or rust.

A rust converter will become necessary to complete the job. A rust converter reacts with rust (iron oxide) to yield a non-rust substance that protects the metal surface.

How to Prevent Rust From Forming on the Undercarriage

After removing the rust, it’s essential to prevent future corrosion and keep your car in good condition for many more years. Follow the steps below to prevent rust from forming on your vehicle again.

Puddles contain salt and dirty water, which can form rust with your car’s undercarriage after a while. Puddles will splash and stick to your vehicle when you drive through them. It’s only a matter of time before rust begins to form. So, it’s best to avoid puddles as much as you can.

You can’t always control what gets underneath your car, but you can ensure they never stay long enough to cause any significant damage. So, always clean your car’s undercarriage regularly.

Car wash services have high-pressure sprinklers that send water into the nooks and crannies of the car’s undercarriage to remove saltwater and debris. You can also try splashing water underneath your car at home if you have a hose.

A rust-proof formula will prevent rust from forming on your car by interfering with the process that produces iron oxide or providing an additional protective layer. Most rust-proofing formulas come as oil or rubberized sprays.

The coating prevents direct contact with water, salt, and debris. Apply regularly from time to time. Ensure that your car undercarriage is dry before spraying.

There’s also an electronic rust-proofing system that’s equally effective. This system interferes with the reaction of oxygen and water to prevent rust formation.

Rust isn’t good for your car. It degrades and reduces its value. It can also damage vital parts if not treated immediately. Your car’s undercarriage is often overlooked, but it’s the area most prone to rust.

Removing rust from the undercarriage involves using sandpaper, a wire brush, and wax and grease remover. Taking steps to prevent rust formation will stand you in good stead, and will mitigate the risk of your car’s undercarriage rusting.