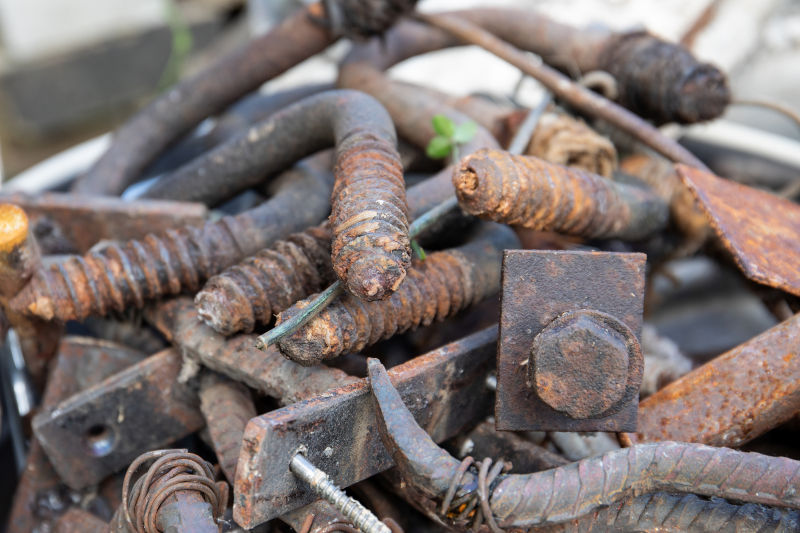 Recycling is an environmentally friendly way to reduce waste, and it can be an excellent way for people to get rid of items or materials that they no longer want in their homes. However, if you have scrap metal that you’ve had for a while, it might have a little rust on it. Is it still okay to recycle?

You can recycle rusted metal since the recycling process purifies it. However, rusted metal weighs less than non-rusted metal, so the scrap will be worth less than pure metal at a scrap metal yard.

If you have questions about recycling metals, scrap yards, and how to prevent rust so you can make as much money as possible from your scrap metal, keep reading! I’ll address these questions and more, so you’ll be an expert recycler by the end.

Rusted metal is recyclable, but rusted scraps tend to be worth less than newer metal with no rust damage. The metal recycling process purifies and cleans metals, removing rust and other impurities.

Even if your metal scraps have rust, you should still pursue recycling. Recycling scrap metals means fewer environmental risks. That scrap might have chemicals that could negatively impact soil and water, and recycling metal is less expensive than mining in search of new metals.

Furthermore, mining has harsh environmental impacts that should be avoided, including sinkhole formation, soil and water contamination, destruction of habitat, and hazardous byproducts.

To understand why you can recycle rusted metal, let’s take a look at the recycling process:

Rust is removed from metals during the purification process. Because of this step, it is entirely possible to recycle rusted metal.

If your metal just has a small spot of rust, I’d recommend trying to remove the rust before bringing it into a scrapyard so they’ll give you a better price for it.

Why Does Metal Rust?

Metal rusts because some of them oxidize. When you expose metals that contain iron to water and oxygen, a combustion reaction occurs that forms rust.

Metals that don’t contain iron, such as aluminum, don’t rust because rusting is a process that reduces only iron-containing metals into their unrefined state.

Oxidation refers to the process when a chemical reaction occurs. The iron loses an electron during this process, making it less stable. Iron and oxygen have opposite charges, so in the presence of water, they combine, and oxidation occurs, with the iron atom losing three electrons.

This reaction forms Fe203, ferric oxide, otherwise known as “rust.” You can remove rust in small chunks, but it is impractical to attempt to remove large amounts of rust. If you are going to try to remove a bit of rust from a metal scrap you wish to recycle, here are some ideas for how:

How to Prevent Rust

It is best to avoid rusting altogether, if possible, so here are some ways that you can prevent your metals from rusting before you can get them to a scrapyard:

If you take steps to prevent rust before taking your metals to the scrapyard, you’ll ensure you get top dollar at the scrapyard.

What Metals Can I Recycle?

You can recycle almost every metal, including steel, iron, aluminum, nickel, and copper. However, you cannot recycle metals containing asbestos or any metal on public property, such as a street sign.

Here are some common metals that you can bring to a scrapyard:

If you are planning on bringing some scrap to a scrapyard in the hope of earning a few extra bucks, here are some tips for how to make the most you can:

Recycling metals can be a good side hustle depending on how much time and dedication you’re willing to commit to, but it’s easy to make a few extra bucks if you have spare time!