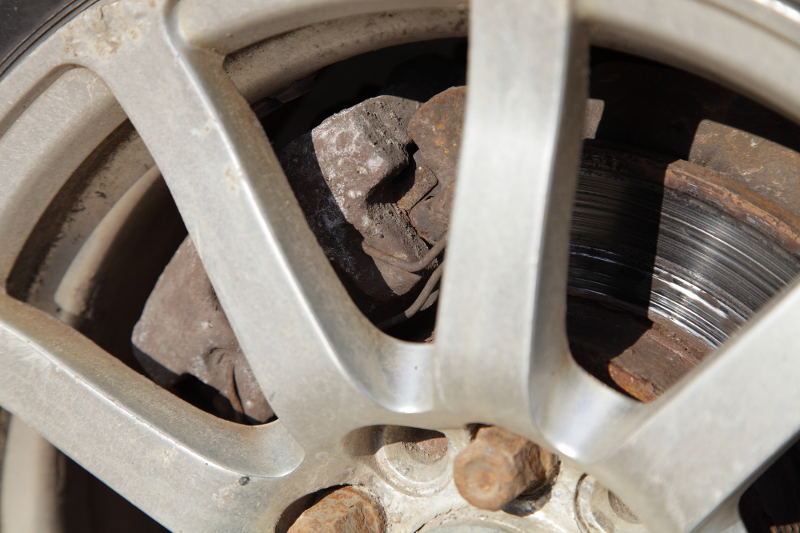 When vehicles are left unused for too long, it’s common for rust and other types of debris to collect on top of the brake components. For this reason, if you’re trying to drive a car that has been left parked for months, you might find it’s near-impossible to move it due to the phenomenon called “brake seizure.”

Luckily, in most cases, this issue is quickly and easily solvable, so if you’ve found yourself in this situation, this article is for you.

In the following sections, I’ll take you through everything you need to know about how to get a car with seized brakes moving again. Usually, the process shouldn’t be too long or complicated, but don’t hesitate to call a professional if at any moment you feel unsure about how to proceed.

1. Turn On Your Vehicle and Troubleshoot

The first thing you’ll want to do is turn on the vehicle. Although there can be some visual cues that can imply a brake seizure, you’ll never be able to reach the correct diagnosis for your car without turning it on first.

If you can turn on your vehicle but can’t move it even when the handbrake is removed, this is a pretty reliable indicator that its brakes have seized.

However, this isn’t the only way the issue can express itself. For example, if the brakes haven’t fully seized yet, you may still be able to drive your vehicle normally for shorter distances. Still, you’ll notice that its braking ability has been significantly reduced.

In these instances, you’ll often feel a pushback and a sense of imbalance when pushing on the brake pedal.

If based on the troubleshooting process, you conclude that the reason your car isn’t moving is due to a brake seizure, you can proceed to the following steps. Remember to keep your vehicle turned on, as it’s the only way to try out the following approaches.

Additionally, keep in mind that even though you might be a highly experienced driver, if you’re trying to start someone else’s car, it’s best to ask them beforehand regarding any tricks that might be necessary during the process.

When the car is turned on and ready to move, remember that the following steps require some care, technique, and, most importantly, patience.

2. Drive Forward and in Reverse

Brake seizures are rarely permanent, which means that with enough patience and insistence, your car will move. So you’ll want to try driving it back and forth. This is an instance where stubbornness is rewarded, as with enough back-and-forth driving attempts, you’ll see that the vehicle will start budging.

As I previously mentioned, brake seizure is caused by rust and debris collected in a vehicle’s components due to its lack of movement. As these components heat up and start experiencing pressure, it’s just a matter of time before the layer of rust created starts peeling away.

Therefore, keep persisting and as soon as you see your vehicle moving a little, quickly change the direction and start driving in reverse. Go through these back-and-forth motions a few times, and you’ll see that the vehicle will begin covering longer and longer distances each cycle.

As the calipers and shoes start being put to use after months of inactivity, the rust bonds will inevitably break, giving the components some much-needed flexibility.

However, as you can imagine, driving your car forward and in reverse a few times won’t be able to provide a long-term solution. Therefore, you might need to introduce some form of lubrication to the components to help the rust and other impurities clear away quicker.

Beware, though, as you’re working with brakes, excessive amounts of lubrication could be inconvenient at best and life-threatening at worst.

For example, you’ll want to avoid using any type of penetrative lubricant directly on your components, as this is not their intended use. By doing so, you’ll risk creating a slippery layer on top of the brakes that could significantly reduce their ability to react in a timely manner.

This Permatex Ultra Disc Brake Caliper Lube from Amazon is one of the most efficient alternatives in the market. Its heavy-duty formula allows it to lubricate even the rustiest brakes, meaning not only will you be able to fix a possible seizing scenario, but you’ll also prevent it from happening again.

Through the use of this lubricant, you’ll be able to ensure that some of the most delicate contact areas on your brakes remain structurally sound and free from damage.

If the “drive forward and in reverse” approach proves to be more challenging than expected in practice, you might be able to make the brakes regain their flexibility faster by applying and releasing them several times.

This is another process that requires a bit of time and patience. Even though it may seem like you’re not doing much, in reality, the applied pressure could help your brakes regain their flexibility much faster.

4. Drive Around to Clear the Corrosion

By this point, your vehicle should be able to move for short distances at a time. However, don’t take this as a win yet, as this is the most critical time to fix the brake seizure once and for all.

Instead, make the most out of your newfound mobility.

Start driving the car around (whose breaks should ideally be lubricated by this point) to get rid of what’s left of the corrosion. Even though you might’ve gotten rid of enough rust to render your vehicle mobile, the progress still isn’t enough to sustain normal functioning.

Additionally, if the car has been sitting long enough, the damage might have spread more than you’d think. For example, the rust collected might start bubbling, which can create some raised patches under the pads. As you can imagine, this could quickly throw off the component’s performance, making it a possible hazard.

This is why you’ll want to slowly start driving your car around beforehand to get rid of any residue rust and make sure there aren’t any surprises you’ll have to face once going 65 mph on a highway.

Rust can be more stubborn than you’d think, which is why sometimes, simply driving the car around and hoping the problem will solve itself doesn’t work. Therefore, even though you might think your vehicle is ready to cover longer distances, I’d urge you to try manually cleaning the corrosion first.

This process can also be extremely helpful to those who haven’t had much luck trying to move their car using the previous method.

Just remove the wheel and use a mallet that’s ideally made out of rubber to tap your calipers. This motion will cause most of the rust bonds to fall off, rendering the brakes movable again.

Alternatively, if you’re dealing with drum brakes, you’ll want to rotate the component until its access openings are lined up with their corresponding adjusters inside. I know the process might seem intimidating at first if you haven’t got much experience when it comes to auto repairs, but by following this quick, simple guide, you’ll be able to rotate your drums in no time.

Clearing the corrosion manually is the most fool-proof way to ensure your brakes become rust-free and usable.

Therefore, regardless of whether the previous methods have worked as expected or not, I highly recommend taking the time to go through this process. Not only will doing so help you solve your current problem, but it can also help prevent it from happening again.

However, if you feel you’re unqualified to clear the brakes’ corrosion yourself, don’t hesitate to call a professional.

I know this isn’t what you want to hear, but in some instances, the rust build-up is so severe there’s virtually nothing you can do about it in a pinch. Therefore, calling a tow truck and taking your vehicle to be looked at by a professional is always a choice that could end up saving you time and money in the long run.

Even if you’re able to get your car moving using the previous methods, I’d still urge you to take it to your nearest mechanic as soon as possible, as you’ll never know the extent of damage corrosion might have caused on your car’s components.

Additionally, this is the only approach you can take to make sure you won’t have to deal with seized brakes again.

Trying to move a vehicle that’s been parked for months, or even years, can be more challenging than you’d think. Due to the lack of usage, rust often tends to build upon your car’s components, causing what is widely known as “seized brakes.”

Luckily there’s no shortage of quick (and not so quick) approaches you can try to get your vehicle moving in no time. If all else fails, don’t hesitate to ask for the help of a professional.

Related post: How to Remove Rust From Car Rims