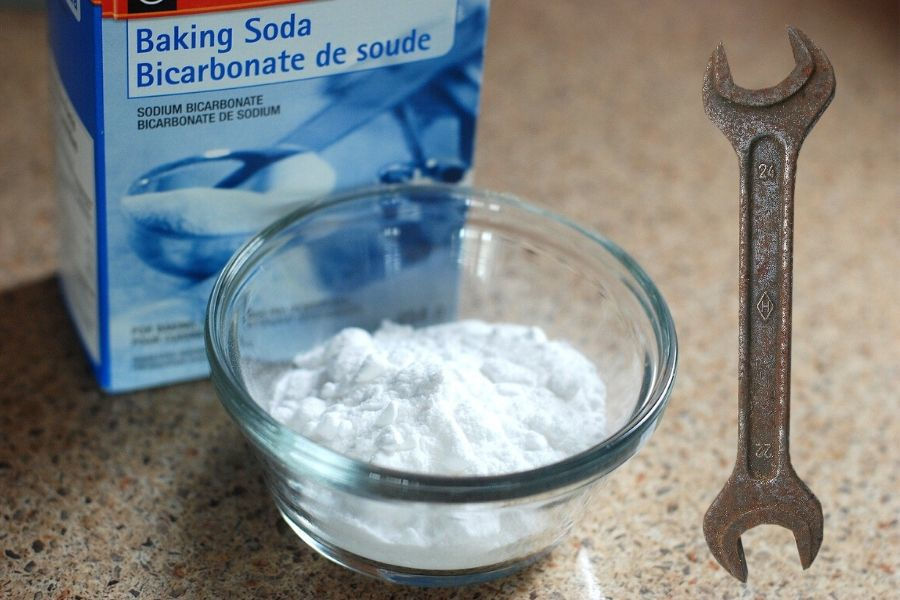 Rust is the enemy for most of your metallic objects. From bike handles to kitchen knives, rust can form on any object that’s constantly exposed to water, including your car. When this happens, it’s natural to panic, especially if it will cost lots of money to replace the object if the rust gets worse. But don’t fret. With baking powder at your disposal, rust can be a thing of the past.

So, do you know how to remove rust with baking powder? It’s quite easy. All you need to do is:

You don’t have to invest in expensive rust removal processes, especially if the surface doesn’t have much rust on it. With baking soda, you can get the metallic object to look as good as new. In this article, you’ll find out how to go about it step-by-step for the best results. You will also learn some alternative methods of removing rust just in case baking soda doesn’t do the trick.

Baking soda applications go far beyond baking. You’ve probably seen it in most people’s refrigerators acting as a deodorant. And in some cases, it’s combined with vinegar for cleaning purposes. But why is baking soda so effective?

Baking soda is scientifically known as sodium bicarbonate, and it’s a salt.  It has a pH above neutral and is therefore considered a basic solution, which makes it excellent for cleaning.

However, when it comes to rust, it’s the abrasive nature of baking soda that does most of the work. This abrasive nature gives it the grit to break down particles and remove stains from surfaces.

How to Use Baking Soda to Remove Rust

Now that you know the science behind how baking soda works to get rid of rust, you’re probably wondering how to do it.

If you’ve tried using baking soda and you’re not satisfied with the results, or you don’t have baking soda at home, the following methods are excellent alternatives.

Use White Vinegar for Stubborn Rust

White vinegar is an excellent product to use on stubborn rust. The acetic acid in the vinegar dissolves the rust, leaving the surface as good as new. Not to mention, using vinegar is a more hassle-free process. All you need to do is:

This technique relies on the abrasiveness of salt and the acidity of lemon to get rid of rust. To remove rust using the lemon and salt mixture:

If the rust is on a large piece of furniture, barbecue grill, mailbox, bicycle handles, or any other large object, Naval Jelly is the best solution. The best thing about Naval Jelly is that it’s effortless to use. All you’re required to do is to spray the solution onto the rusty surface and leave it on for about 10 to 15 minutes. The rust will dissolve.

Afterward, you’ll need to clean the object to remove the dissolved rust. Don’t forget to dry it to prevent further rusting. It may also help to paint or oil the surface to protect it from further rusting when it comes into contact with water.

Consider the following products if you decide to go for this method of rust removal:

Use Coca-Cola as a Last Resort

Coca-Cola also has an excellent reputation for being fantastic for cleaning. From toilet bowls to jewelry, coca-cola has proven to be a must-have item for stubborn stains, and this includes rusty objects. Soak the item in the cola; leave it there for an hour or overnight.

For small objects, you can use a small container to hold the objects and fill the container with cola. For more substantial objects, consider soaking them inside a bathtub to ensure every part is submerged in the cola.

Next, take the object out of the cola and use a scrubbing pad or steel wool to scrub off the rust. Afterward, clean the surface and repeat until you’re satisfied. The challenge with cola is that it can be quite sticky. Therefore, make sure you try the other methods before opting for this one (check this article for more information about using coke).

Rust is a real eyesore, and it can be quite annoying, especially when it’s forming on your favorite items. Fortunately, as you have seen, baking soda is an effective solution to this problem. Its abrasive nature makes getting rid of rust an easy process. However, if there is too much rust or it’s forming on a large object, you may want to consider other methods of removing rust, such as using Naval Jelly or white vinegar.

Do not forget to repaint or oil the metallic object after using any of these DIY solutions for removing rust. The paint and oil act as a barrier, thereby protecting the surface when it comes in contact with water. As a result, you won’t have to deal with rust any time soon.