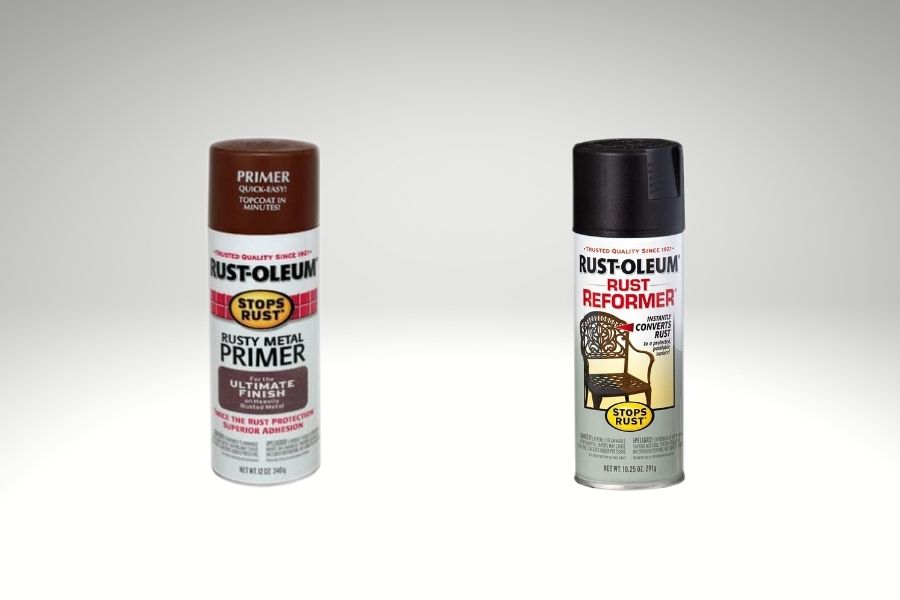 Plenty of products on the market today, such as Rust-Oleum, will help you take your rusted piece of furniture or yard decoration from falling apart to looking brand-new. The rainy season can especially hit metal objects hard if they aren’t taken care of or stored in a dry place. But what’s the difference between Rust-Oleum’s metal primer and reformer?

Rust-Oleum Rusty Metal Primer is a good rust converter for metals that are heavily rusted but not yet falling into pieces. The Rust Reformer product is better when the rusted object is almost beyond saving. Both convert rust to a more solid surface, allowing for a paint to be applied.

But which product you need will depend greatly on what you are hoping to restore, as well as the corrosion level. For a full explanation on how rust converters work, and a comparison of these two products, read on.

Products like the Rusty Metal Primer and Rust Reformer are considered rust converters. Essentially, what this means is they don’t remove the rust but convert it from iron oxide to iron tannate.

Rust occurs through a process called oxidation. Oxidation is a chemical reaction of the surface of metal. Often when water is present. Oxidation occurs most commonly on steel, but some metals resist oxidation.

Noble metals are the most notable, which include gold, platinum, silver, palladium, and more. Other metals that resist oxidation include titanium, niobium, and tantalum.

Base metals are the opposite and are prone to corrosion. Metals in this class include:

A rust converter will be used to save a wide variety of objects and structures. Professionals use them to restore historical items, staircases, fencing, and outdoor furniture. When using to restore furniture, make sure the furniture still has structural integrity. These converters don’t add support to an item.

These two products from Rust-Oleum essentially do the same job. As converters, they convert the rust into a more stable surface by stopping the oxidation process. The new surface is then clean and ready to be painted.

Where these two products differ is the degree of corrosion of the object and the follow-up steps.

The Rust-Oleum Rusty Metal Primer is used on moderately to heavily rusted items that are in good structural standing. In order for the primer to be applied, the surface has to be cleaned of loose rust and washed. Any surface that would not hold up to this prep work should be treated through another process.

The metal primer is a paint and rust converter in one. It’s oil-based and comes in one color choice. This primer is one of the best because it works well and works on most metal surfaces.

For best results, the primer should be applied in 2 coats before applying the top paint. You could also use this primer in the form of a spray for easier application.

Because this is a primer, you will need to finish off the metal surface with the color of your choice. Rust-Oleum offers enamel-based paints that work well when paired with the primer to prevent future rusting and chipping.

When you have a metal surface that’s heavily rusted and won’t hold well to sanding and washing, the Rust-Oleum Rust Reformer will be a better product. The product instructions claim no sanding is needed and can be sprayed straight onto the metal surface.

The Rust Reformer isn’t a primer. It’s water-based and uses tannic acids to convert rust into a stable surface. The formula will turn your objects or furniture into a clean black surface. From here, you can prime and paint to the desired color. I suggest using an oil-based primer and paint after using the Rust Reformer.

Rust-Oleum suggests at least two light coats of the Rust Reformer before priming and letting the object dry for 24 hours between coats.

Rust-Oleum does offer a third product for metal surfaces that are lightly rusted. To see the difference between the three, check out this quick explanation from Rust-Oleum:

For a quick side-by-side comparison of the Rusty Metal Primer and Rust Reformer, here is a table comparing the important features:

As you can see, the two are similar. If you aren’t sure which one is more suited to your project, go with the Rusty Metal Primer. It requires fewer steps and will work on almost any project.

For a step-by-step explanation on how to prep and paint your rusted metal surface, continue reading the next section.

How to Prep and Paint a Rusted Surface

It’s simple to restore a rusted metal item or structure to like-new quality. Before you start, you will need these supplies:

As with all paints, it’s important to have a clean workspace and the proper draping. If the object is small enough, it should be placed on a drop cloth to protect the other surfaces.

If you are working on metal fencing, try to lay drop cloths as close to the fence on both sides.

Have all your supplies ready to go in the workspace, so you know where each is when you are ready to use them.

Before you start prepping the metal surface, put on your safety gear to protect your hands and face.

The latex gloves will protect your hands from metal scrapings and any lead from old paint. They will also save you from having to scrub the paint off of your hands during clean-up.

A face mask will stop you from inhaling any of the harmful chemicals that are in the spray paints and residual lead from the old metal surface.

Eyeglasses are a precaution to prevent any paint or lead from getting into your eyes.

Now that you and your work area are fully protected, start by gently scrubbing or sanding the metal surface clean of rust. The wire brush is the easiest solution for removing rust flakes from the metal. You will want to get as much off as possible.

If you think a wire brush might be too abrasive, a fine grit sandpaper will work. Or if you have a large project, a wire wheel attachment on a power drill will work faster.

Once the metal surface is clear of as much rust as possible, then wash the object with soapy water.

For the metal primer to attach properly, the surface needs to be clean of rust, oils, grease, salt, and any chemical contaminants.

If it’s a small item, dip it into a bucket of soapy water and let it air-dry completely. For a larger item, use the rag to wash with soapy water before letting it dry.

Shake the can of Rust-Oleum Rusty Metal Primer for about 1 minute to make sure the pigment is mixed in. You should hear the metal ball banging around in the can. If you don’t, do not use it!

Hold the can upright and at least 10 inches from the metal surface. Spray in a back-and-forth motion until the whole surface is covered. It’s suggested to re-shake the can intermittently while spraying. Allow the metal surface to dry for at least 1 hour before applying the 2nd coat.

After the 1 hour, apply the 2nd coat in the same fashion as the 1st. If the object is large, you might need a second can.

Using Rust-Oleum Protective Enamel Paint, Rust-Oleum suggests not waiting much more than 1 hour before applying the paint to the recently primed surface.

Shake the can for 1 minute to make sure the pigment is mixed, and spray at least 10 inches from the surface. Continue back and forth until the whole surface is covered. Wait another hour to allow the paint to dry before painting a second coat.

Allow the object to dry for a full 24 hours before using it.

Now that you are done applying both the primer and paint, it is time for cleanup. In case you spill the Rusty Metal Primer on a surface, do not worry because it can be easily cleaned up with mineral spirits while it is still wet.

For a rusted surface, Rust-Oleum Rust Reformer or Rusty Metal Primer will help cover the rust and restore the metal surface. The difference between them comes down to how corroded the metal surface is.