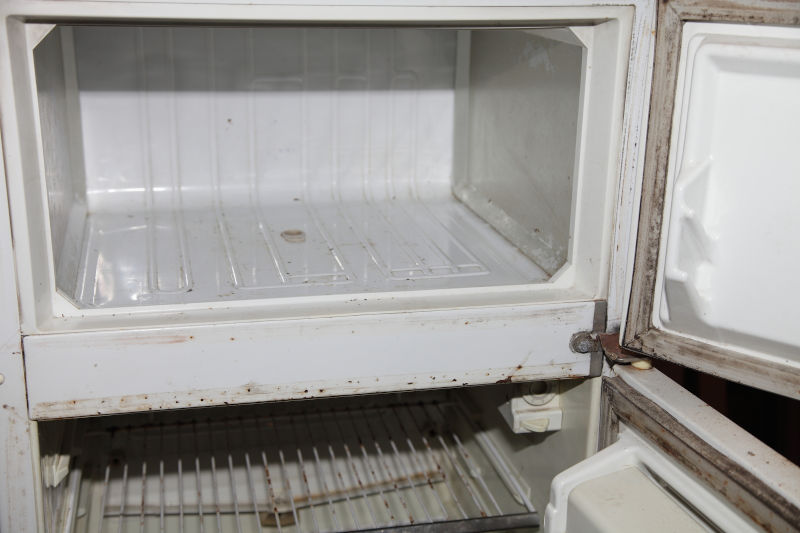 Older refrigerators can often be covered in rust. Sure, you can always clean them thoroughly, and they’ll look like new, but we can’t help but wonder if it’s safe to put any food in there even if there’s only a speck of rust left. Is it that dangerous to have rust in your fridge?

Rust in refrigerators is not dangerous. Rust doesn’t cause any serious harm to human beings. Since the inside of refrigerators can get wet after cleaning or when there’s a temperature change, rust can appear. Rust is harmless for humans and doesn’t affect the food in the fridge.

In the rest of this article, I’ll tell you why rust in refrigerators is not dangerous. Additionally, I’ll mention why there’s rust in your fridge in the first place and how to clean your fridge from rust properly.

Why Rust in Refrigerators Is Not Dangerous

We often think that rust is extremely harmful or even poisonous for human beings. As soon as something we own that’s made of iron starts rusting, we immediately throw it away. Or, we try to remove the rust, and if it doesn’t work, then we throw it away.

In fact, rust is almost completely harmless for human beings. Our skin doesn’t have any reactions to rust except the reddish color that gets stuck to our skin. And, if you accidentally swallow some rust, you would be fine (I don’t recommend you try it, though). Larger quantities of rust in your system could cause reasons for concern.

So What Exactly Is Rust?

Rust appears as a result of a process called “oxidizing.” During this process, a thing or an object made of iron needs two additional components to create rust. The two components are:

But, we can see that none of the three components of rust is harmful to humans. In fact, all of these components are found in the human body, and we wouldn’t survive without them.

Another reason why rust in refrigerators is not dangerous is that rust affects iron or steel and not our food. So, if rust does appear, the food and drinks in the fridge are completely safe. You can always simply keep the food away from rusty spots.

This shouldn’t be a big issue for humans since rust attacks only some metal surfaces. Some infections are often tied to rust even though they are not caused by it. Tetanus is the most frequent infection many people believe is caused by rust. That’s because tetanus bacteria are often found on rusty objects such as nails.

Why Is There Rust in Refrigerators?

It is important that refrigerators are cleaned and dried regularly. Although we sometimes clean our refrigerators and forget about drying them, this is what could cause rust to build up. The water that is left after the cleaning gets combined with oxygen, and rust slowly begins to appear on metal surfaces.

Change in Temperature Inside the Refrigerator Can Cause It to Rust

Those of us who live in places where the summer can get pretty hot can notice how our fridges get more and more rusty every year. What’s that all about?

Well, a big difference between temperatures outside and inside refrigerators can affect their durability. When it gets really hot outside the fridge, the inside stays cool. But, when you open the fridge to get some cold drinks, the temperature inside it starts to change.

Some of the hot air from your kitchen gets into the fridge, and the temperature starts to rise slowly. This creates moisture in the fridge, which, in turn, creates rust. This is a slow process that can even take years to become visible.

Many of us tend to think that just because something is made of “stainless steel,” it doesn’t rust. That may be true in some cases, but stainless steel can and does rust, especially if water or moisture is involved.

It is true that stainless steel has a protective layer against corrosion, but this means that your stainless steel refrigerator will stay rust-free for only a long period of time, not forever, unfortunately.

Since rust can easily appear, even on stainless steel, let’s take a look at how to prevent rust from occurring and how to clean it when it does appear.

How to Prevent and Clean Rust From Refrigerators

It would be best to prevent rust from ever appearing in our fridges, but once it appears, it’s not over yet. There are various methods to remove rust, although, as I discussed, there’s no real reason we should be fearful of rust.

How should we prevent our refrigerators from getting rusty?

Never Leave Any Water Inside or on the Refrigerator

We’ll need to use water or some other cleaning liquid to clean our refrigerators. But it’s really important to dry all the water after we clean the fridge.

The best option is to use a dry towel that you don’t use for anything else. You can also use paper towels.

If you’re cleaning your fridge that’s already turned off, you can leave it to dry for a couple of hours. Once it’s completely dry, you can turn it back on.

Don’t Open the Refrigerator Too Much

It’s generally advisable that we open our refrigerators only when we need to grab something. Some people like to open it frequently or hold the fridge door open for some time. This will affect the temperature inside and create moisture.

Use Baking Soda and Water or Vinegar

If your fridge has only small patches of rust scattered all over, one of the easiest solutions is to use baking soda and warm water. If water doesn’t do the trick, try baking soda with vinegar.

First, sprinkle some baking soda over the rust in your fridge. After that, pour over some water or vinegar and let it rest for a couple of minutes. Then, scrape the mixture and clean it with only warm water.

Sometimes, the easiest solution is to go and buy rust remover. This is a quick method of getting rid of the rust from your fridge. Just make sure to follow the instructions and clean the fridge with water after you use the remover before you put food and drinks back in the fridge.

I recommend Clean My Steel Rust Remover from Amazon. This product is non-toxic and safe to use around food, making it perfect for your fridge.

See also: How to Paint a Rusty Refrigerator

If you one day notice some rust in your refrigerator, don’t worry. Rust is completely safe for human beings, plus it doesn’t affect the food.

Rust appears when water or moisture comes into contact with some metals and oxygen. So, refrigerators are often prone to get rusty since there is always moisture present in fridges. But, if your fridge gets a bit rusty, don’t throw it away. It’s not a big deal, plus there are numerous methods to protect and clean rust from your fridge.