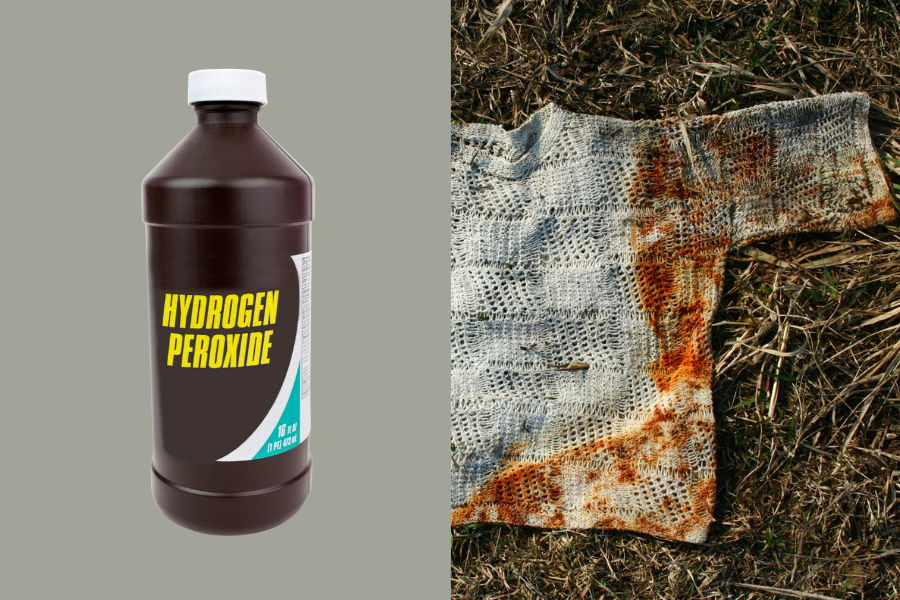 Hydrogen peroxide will remove rust stains from clothes. Add a few drops of hydrogen peroxide to the cream of tartar and baking soda. Take that paste and put it on the rust. Leave it there for 30 minutes to give it time to dissolve the rust. Keep in mind that this can bleach the fabric.

In this article, you will learn how to remove rust stains from clothes using hydrogen peroxide as I explain the steps you need to take.

How To Remove Rust Stains From Clothes With Hydrogen Peroxide

Next, take the hydrogen peroxide and mix it with baking soda and cream of tartar. These are two common household ingredients that are often used to remove stains and for cleaning purposes. They are entirely natural bleaching agents. You will want to create a paste using these three ingredients.

Use a teaspoon each of baking soda and cream of tartar (also known as tartar cream). Then, use a few drops of hydrogen peroxide until the mixture becomes a paste. Once that happens, rub it onto the rust and try to get it out.

Let the paste sit on the stain for half an hour or so. Letting it sit will give it time to dissolve the rust so it will come off easily. You might let it sit outside, in the sun.

Before you use the paste on the rusty area, I recommend using it on a corner of the fabric to test it. If it is a dark fabric, you might find that the paste takes away the color. These are natural bleaching agents, after all. If the paste is causing the color to fade, use more cream of tartar and less baking soda and hydrogen peroxide to weaken your mixture.

This YouTube video shows you how to use lemon juice to remove rust:

Check this article for more tips on how to remove rust stains from clothes.

Removing stains with hydrogen peroxide and other ingredients is rather simple and easy. You can find the cream of tartar, hydrogen peroxide, and baking soda at your local grocery, pharmacy, or convenience store. You can also order it online if you do not wish to go out. Lemon juice and salt are even easier to find, and you likely have them in your pantry already.