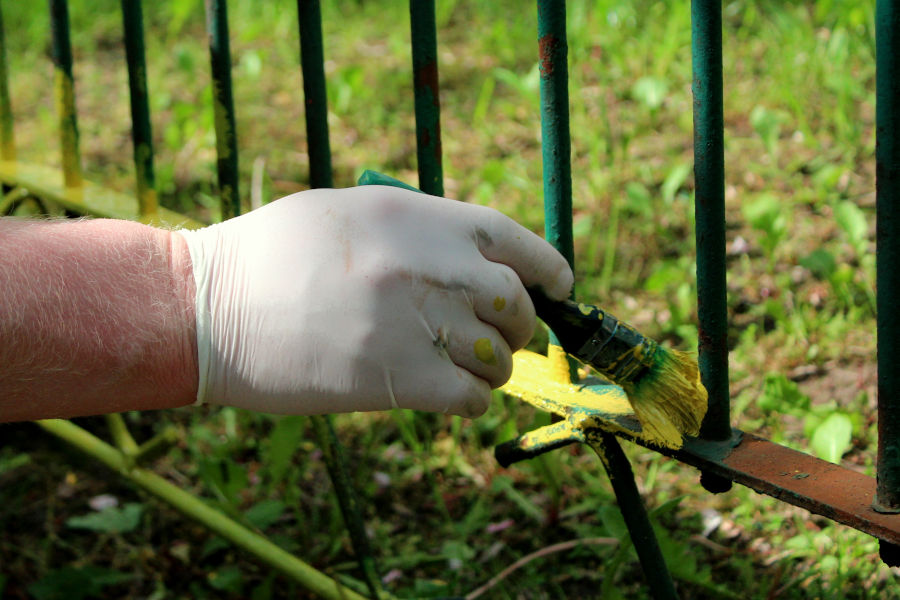 If you notice that there’s some rust on a piece of furniture or elsewhere in your home, you may want to cover it. You could remove the rust, but you may prefer to paint over it. But you should consider if that’s the best course of action.

Painting over rust can stop the rust from spreading, but there are some things to consider. It’s important to think about the extent of the rust and how or if the paint will hold. Scraping off surface-level rust and using a primer can also prevent issues.

Painting over rust is a great way to stop it. But you need to consider the extent of the corrosion and choose a paint that will provide enough coverage to prevent future rust. Keep reading to learn more about why metals rust and how a coat of paint can help.

How Painting Over Rust Stops Rust from Forming

Painting over rust can stop the spread by disturbing the process that creates rust. As long as the rust doesn’t cover a massive area, you should be able to use paint to stop it. However, you should consider how rust forms and how thick or wide the rust is.

If the rust has taken up a bigger area, it will be harder to contain. You may need to use an extra coat of paint to get the best results. Either way, consider how rust develops so that you can determine if painting over the rust is possible.

Another name for rust is iron oxide, and it develops when iron mixes with oxygen. However, to form rust, you need to have water or moisture. Rust can also form on iron alloys, including steel.

Pieces of metal can rust even without a constant water supply, but moisture will speed up the process. You can coat the iron, which can keep rust from occurring on the metal. Paint is a surprisingly easy option for coating iron and iron alloys to prevent rust.

For more information about preventing rust formation, check this article.

While paint can prevent the development of new rust, it can stop current signs of iron oxide. The paint forms a barrier between the existing rust and the environment, and that barrier keeps water and air from getting to the rust and the entire piece of metal.

If you want to stop rust on the entire piece, you shouldn’t just use paint on the affected area. You should paint the entire piece to give it a thorough coating. Then, you can prevent other spots from getting rust.

How to Paint Over Rust

If you want to stop a piece of metal from rusting even more, painting is your best option. However, you need to take some precautions because simply painting over rust isn’t as efficient.

You should consider the condition of the metal and the extent of the rust. If the rust is just beginning, you won’t need to do much before you paint. On the other hand, if the rust has been growing for a while, it will take more prep work to make painting work well.

Moreover, if the rust has gone beneath the surface, the item may not be salvageable, even with a good layer of paint. Think about the item you have and how badly you want or need to restore it. Then, you can take the necessary steps to stop the rust.

The first step to painting over rust is to remove any loose parts. It may not look like it, but you may be able to rub off much of the rust, especially if it’s relatively new. You can use sandpaper or a wire brush to get the rust off the metal.

If you don’t at least try to remove the rust, the paint will look uneven. While you may not be able to get all of the rust, you should remove the majority of it. Then, you can reduce the chances of the rust spreading in case you don’t fully cover it with paint.

If you use a primer, you will increase the chances of the paint sticking to the metal. You should clean the piece of metal as well as possible then let it dry. It’s possible to use any quality primer but consider a rust conversion primer, like the Rust-Oleum Rusty Metal Primer.

The primer has an oil-based formula that helps protect the metal and can prevent future rust. It also dries quickly, and it works well on metal that you use regularly. The primer dries in about 15 minutes, so you don’t have to wait forever before painting.

Using a rust-specific primer can help add an extra layer to the metal to avoid rusting, whether you want to protect metal that’s indoors or outside.

Once you apply a rust primer, you can use the paint of your choice. You can select the right color for your metal, and you can use a spray can or a traditional can of paint. Now, using rust-specific paint can have better results than other types of paint.

Either way, consider how you want the final product to look. A spray can will give a more even appearance, but a brush and can might be better for smaller areas. Be sure to wait between coats to dry and add as many coats as the manufacturer recommends.

Should You Paint Over Rust?

When determining if you should paint over rust, consider a few things. Consider how the metal looks and how much rust there is. Try to remove the existing rust to see if you can get rid of all of it.

You may also want to think about the purpose of the metal object. Consider if painting over the metal will make it look better or worse. You may not want to ruin a piece of metal just to protect it from rust.

Why Paint Over Rust

Painting over rust can have more benefits than simply stopping it. Think about a few other ways in which your item can benefit from a coat or two of paint.

Painting over rust can be a great option in many cases. It offers both practical and stylish advantages.

Why Not to Paint Over Rust

Before you start painting over rust, consider some of the disadvantages to doing so. It’s usually a good choice, but you should know both sides.

It’s important to consider what can happen, both good and bad before you add paint to metal. The pros do outweigh the cons, but you shouldn’t ignore the downsides.

Painting over rust can stop the rust from spreading, but you need to be careful. As long as you attempt to clean and remove the rust and use rust-specific paint, you should have no problems.