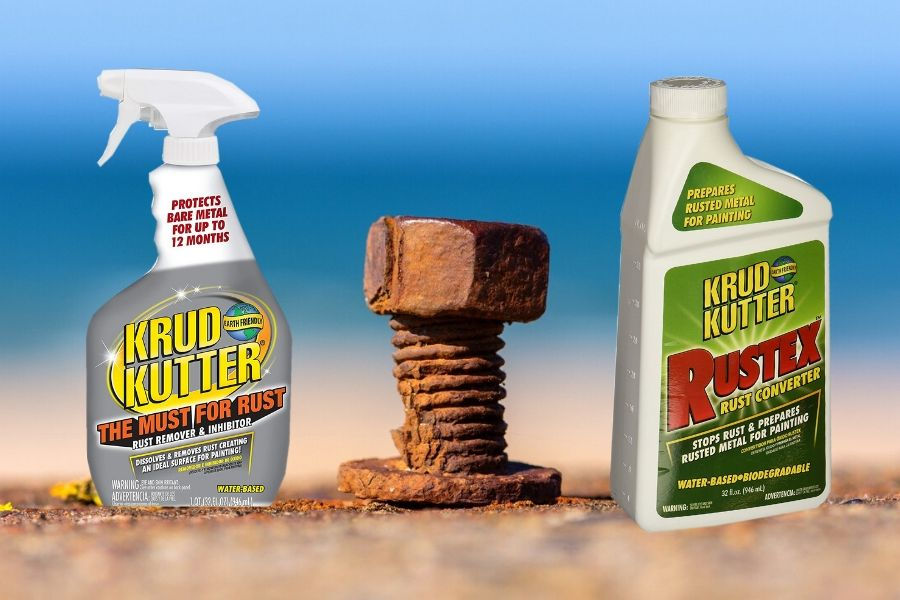 If you’ve ever used store-bought rust remedies like rust removers or converters, you probably know that they’re not always effective. However, there’s one brand that is praised for its quality rust treatment solutions — Krud Kutter. So, I decided to try out its rust remedies for myself. My Krud Kutter rust remover and rust converter review will show you whether these products live up to the hype.

Krud Kutter is a US line of cleaning products by Rust-Oleum. It has been around for several decades, and it now features nearly ten different ranges of cleaners.

What’s curious about Krud Kutter’s products is that they are all non-toxic and biodegradable, including its rust remedies. The brand’s eco-friendly disposition is also reflected by its motto: “Tough on Krud, but Gentle on Nature.”

Still, can a rust remover with a non-aggressive formula restore the old shine of your rusty items? After all, home remedies such as vinegar and lemon juice are also free of toxic chemicals. Yet, they only work on mildly rusty surfaces, and the results they offer are hardly impressive.

Let’s find out if Krud Kutter’s rust remedies are cut out for success! I’ll focus on Rustex Rust Converter and Rust Remover since they’re the brand’s flagship products in this category.

The rust remover by Krud Kutter contains dilated phosphoric acid that dissolves oxidation. Also, the product is suitable for the treatment of a long list of metals and metal objects, including:

What’s more, the rust remover is safely applied on surfaces that are easily stained by calcium. Therefore, you can even use it to clean glass, porcelain, tile, or fiberglass surfaces.

Aside from eliminating rust, Krud Kutter will also provide the metal with rust protection for up to twelve months. The product achieves that by forming small crystals that bind with the metal surface’s molecules. As a result, corrosive agents can’t get to the bare metal and cause harm.

If you’re planning on repainting a rusty metal, you can also benefit from this rust remover. According to its label, it can improve the adhesion of paint, primer, or coating.

A few years ago, Rust-Oleum expanded its rust remedies range. In 2016, the company released Krud Kutter Spray Gel Rust Remover. As the name of the product suggests, it’s a gel version of the good old Krud Kutter rust remover.

Unlike its predecessor, the gel in the new product clings better to metal. So, it’s more suitable for the treatment of vertical surfaces. The improved rust cleaner is available in a 32 oz. spray bottle. Also, just like the original, it performs three different actions:

The rust remover by Krud Kutter is easy and quick to apply. Best of all, it should provide you with fast results. There are three application methods you can use:

However, before you apply the cleaner, you need to prepare the surface for treatment. Otherwise, the product may not be able to penetrate the metal.

Start by removing grease and oil from the rusty item with a toothbrush or a wire brush. Then, rinse the metal surface with some water to remove any dirt. If you’re dealing with a rusty object that consists of several parts, make sure you disassemble it first.

Once you’re done with the cleaning process, you can apply the rust remover. Keep in mind, however, that different materials require different application methods.

You can remove rust from chrome and aluminum by spraying or rubbing the product into the wet metal surface. Usually, you will be able to see results after several minutes. Therefore, let the cleaner sit for about half an hour after you apply it. The rusty item can also be dipped in the solution.

When the rust comes off, wipe the metal with a damp cloth. If you are planning to paint the surface, wait for half an hour first. That will allow the product to do its magic and to dry completely.

The application procedure for steel and iron is similar to that for chrome and aluminum. The only difference is that you need to apply it only to a dry metal surface.

Like steel and iron, rusty galvanized metals must be cleaned when they are dry. Once again, you can apply the product using one of the three application methods.

You can even use Krud Kutter on galvanized surfaces that aren’t showing signs of rust. By doing so, you will get the metal ready for painting. However, don’t let the product sit for too long, because it can damage the surface of the item. Wipe it off about a couple of minutes after applying it.

If you want to clean calcium stains from non-metal surfaces, simply spray the problem area. Leave it for four minutes and then rub the cleaner into the rust with a brush. Remove the solvent with a damp cloth or water. If the stains are still visible after you’re done, repeat all steps until the surface becomes spotless.

To remove rust and oxides from your car’s cooling system, pour some of the product inside. Let the rust remover circulate in the system for a while. Then, remove the cleaning liquid with some water.

I tested Krud Kutter’s rust remover on a long list of surfaces. For the most part, the results were quite impressive. The label of the product recommends letting the cleaner sit for about half an hour. However, I was often able to notice a change even after fifteen minutes. Yet, I found that rust that is decades old needs more time to dissolve.

Also, I tried soaking rusty nuts and bolts for several hours to see if the product will damage their surface. To my surprise, the rust remover got rid of all the rust without harming the metal. So, you shouldn’t have any problems even if you soak your rusty objects for a day.

Best of all, the product has no smell. I used it indoors, and I didn’t sense any odor.

The price of Krud Kutter’s rust eliminator varies from retailer to retailer. However, you are not likely to spend more than $18–20 on its 32 oz. bottle. In comparison, other leading brands, like Evapo-Rust and Metal Rescue, sell their products for a little over $20 per gallon. Therefore, Krud Kutter’s solution is not among the most affordable on the market.

Still, it’s worth investing in this US-made rust remover. As I mentioned, the product gets the job done every time. Also, aside from getting rid of rust stains, it protects the metal for up to one year. So, the high price of Krud Kutter is reflective of the high quality it offers.

Like Krud Kutter’s rust cleaner, the brand’s Rustex Rust Converter contains phosphoric acid. However, it works in a different way. Instead of removing rust (iron oxide), it converts it into iron phosphate. By doing so, it offers the following effects:

The product can be applied on metal or galvanized surfaces. To use it on metal, start by cleaning off any grease, dirt, and oil. Then, remove heavy rust and paint with a wire brush.

Apply the rust converter by brushing or spraying it on the rusty surface, and let it sit overnight. On the following day, remove the excess powder from the metal and start painting. Follow the same steps if you want to apply the product to a rusty galvanized surface.

Feel free to use the converter on rust-free galvanized metal too. However, don’t let it sit for more than an hour. Once it etches the metal, rinse the surface with some water and wipe it. Paint it only after it dries.

Unfortunately, Krud Kutter’s rust converter didn’t impress me as much as the brand’s rust remover. For starters, it has an unpleasant smell. So, I wouldn’t recommend using it indoors.

Also, the product’s application is wasteful. It’s too watery, and when you spray it on the metal surface, it starts to drip all over the place.

Another disadvantage for me was that I had to apply it more than once to see any changes. However, in the end, the results were excellent.

Although the quality this product offers could be better, its low price makes it a good investment. The only downside is that you may need to apply it two times or more for it to work. Still, if you want to save money rather than time, the extra elbow grease shouldn’t be an issue for you.

To be honest, I can see why Krud Kutter’s rust remedies are so popular. Even if some of them don’t work from the get-go, the results always end up being great. Still, if I had to choose a winner, I’d go with Krud Kutter’s rust remover. Compared to the brand’s rust converter, it excels in every possible way.