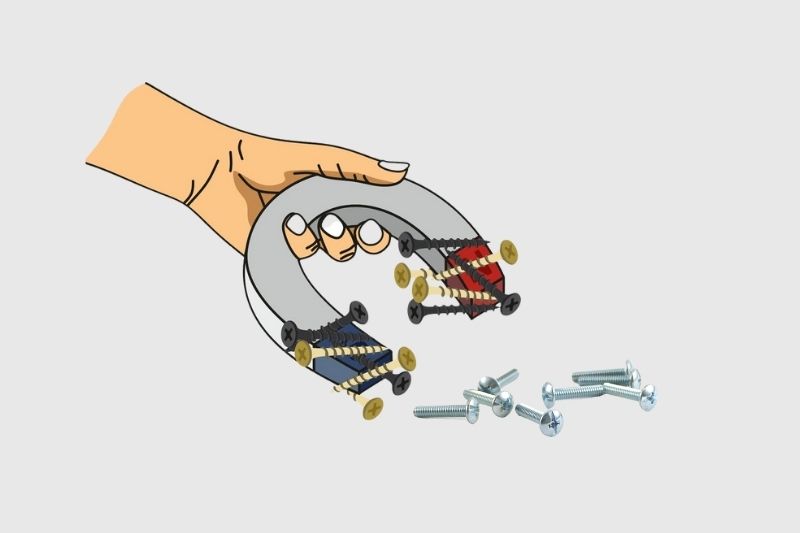 Many people assume that aluminum is magnetic because it’s a metal. However, for a metal to be magnetic, it must also contain an element such as iron. Aluminum doesn’t have iron or any other magnetic element.

In this article, I’ll talk about why magnets don’t stick to aluminum in more detail. I’m also going to explain Lenz’s Law, some of the different types of magnetism, other ways to stick a magnet to aluminum, and what makes something magnetic.

Why Don’t Magnets Stick to Aluminum?

Magnets don’t stick to aluminum because aluminum is a paramagnetic element, meaning it’s only slightly magnetic, primarily due to its crystal structure. However, aluminum can slightly impact a magnet without sticking to it in an external magnetic field.

Most scientists will say that aluminum isn’t magnetic. Since it’s classified as paramagnetic, it only has slight magnetic attributes in strong magnetic fields.

In daily life and in most circumstances, aluminum isn’t magnetic. If you put a magnet next to an aluminum can, it won’t stick to it. However, if you make an aluminum tube and drop a strong magnet into it, it falls very slowly due to the magnetic field.

Additionally, if you move a strong magnet around an aluminum can or other aluminum product, you will notice the can moving in the same direction as the magnet. However, it won’t stick to it.

This is known as Lenz’s Law, but it can be challenging to understand this concept in writing. So, check out this interesting YouTube video to see how it works:

Is There Any Way to Stick a Magnet to Aluminum?

Some people need to do this because they want to stick a magnetic sign on the outside of a car for advertising purposes, for example.

What Makes Something Magnetic?

The electrons in a material determine whether it’s magnetic. When the electrons line up and spin in the same direction, they create a magnetic field, making the material magnetic.

In most materials, such as aluminum, the electrons spin in opposite directions, which cancels out the magnetic field.

However, in elements such as iron, the electrons tend to move in the same direction, which creates a strong magnetic current. Since this is the case, any metal that contains iron is magnetic.

Additionally, any metal that contains nickel or cobalt is also magnetic because these elements all possess electrons that move in the same direction.

What Does Paramagnetic Mean?

When something is slightly attracted to a strong magnet, it’s paramagnetic. Although you’d think from the name that something paramagnetic should be classified as magnetic, that’s not the case.

When something is paramagnetic, it can’t stick to a magnet directly. It can, however, impact the movement of a magnet through what is known as Lenz’s Law.

What Is Lenz’s Law?

Lenz’s Law relates to the study of electromagnetism. The Law states that an induced electric current flows such that the current opposes the change that caused it.

As you saw in the video above, the magnet moved down the tube slowly because of these opposing currents. Since this is evidence of a magnetic field, it proves that aluminum is slightly magnetic but not magnetic enough to attract magnets.

What Materials Are Classified As Paramagnetic?

Other than aluminum, there are a few paramagnetic materials, including:

Magnets can’t naturally stick to any of the above metals, but they can slightly influence them.

Other Types of Magnetism

You now know that aluminum is paramagnetic, but that’s only one type of magnetism. There are other types, but the two main ones are:

Ferromagnetism is what most people think of when they think of magnets. To put it simply, a material is ferromagnetic if it’s attracted to a magnet and sticks to it.

It’s the opposite of diamagnetism. An example of ferromagnetism is a fridge magnet sticking to a refrigerator. Ferromagnetic elements include iron, nickel, and cobalt.

How to Tell if Something Is Aluminum

In most cases, you can tell whether something is aluminum or not by looking at it and feeling it. If it feels like a more flexible metal and has a shiny appearance, it is likely aluminum.

Unlike many other metals, aluminum can be bent and twisted; this makes it easily identifiable. You can also test it by putting a magnet beside it. If the magnet doesn’t stick to it, it’s likely aluminum.

Can Aluminum Be Magnetized?

This creates a magnetic field, but it’s not strong enough to magnetize aluminum.

Aluminum is paramagnetic, so it usually doesn’t react strongly to magnets. However, it can still interact with magnets, which Lenz’s Law proves. Although magnets can’t stick to aluminum, they can affect its movement slightly.

Materials that magnets do stick to must contain an element such as nickel, iron, or cobalt. Any metal that contains one or more of these elements will have a strong reaction to magnets.