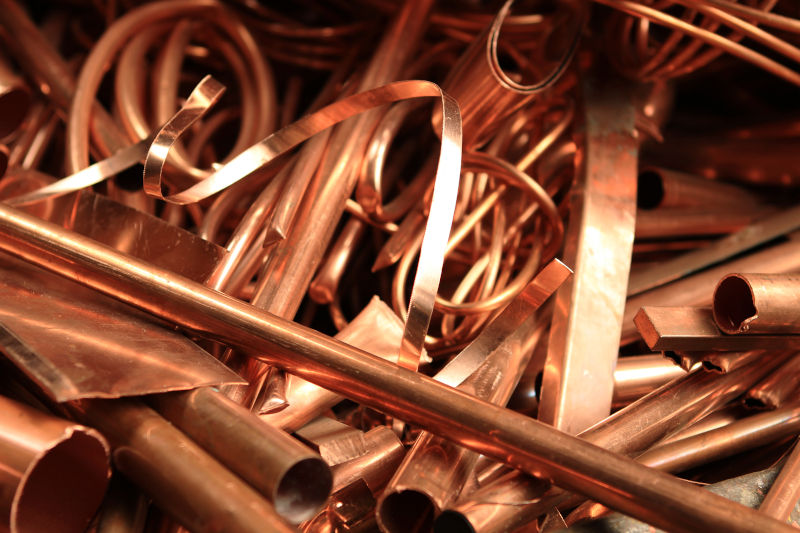 Copper is a highly conductive material, meaning it can transfer electricity efficiently. Given the close relationship between electricity and magnetism, you’d be justified in thinking that copper is magnetic. So, does copper stick to a magnet?

Copper doesn’t stick to a magnet. It’s diamagnetic, meaning it expels magnetic fields when they come close. When you bring a copper object close to a magnet, the two materials repel one another because the electrons from copper’s outermost shell start spinning.

This article will explain why copper isn’t attracted by magnets, how copper reacts when you put a magnet close to it, how to make copper magnetic, and which materials can stick to a magnet.

Why Isn’t Copper Attracted by a Magnet?

You probably already know that magnets have a north and a south pole. Polarity actually describes the direction in which the free electrons flow.

To be more specific, they always flow in one direction.

You can easily visualize the flow by looking at a screw. If a screw is only rotating from left to right, it’ll drag everything underneath it to the top. Similarly, it’ll push everything away from its sharp point.

Magnets do the same but on a molecular level. One side attracts free electrons from other objects, and the other side repels them.

Copper only has one electron in its outer shell. When a magnet comes close to a copper plate, the millions of free electrons spin in the same direction, opposing the magnetic field.

This is called eddy current. It makes copper and magnet repel one another.

Copper essentially creates a temporary electromagnetic field that can only repel magnets. It’s a reaction to the magnet’s magnetic field.

How Does Copper React to a Magnet?

Copper repels a magnet when it comes close to it. Eddy currents, which are loops of electrical current, react to the magnetic field around a magnet or magnetic object. The eddy current pushes away magnets and creates a rotational force.

Copper, along with a few other superconductors like lead, silver, and bismuth, is diamagnetic.

Diamagnetic materials react to magnets by creating an induced magnetic field, whose electrons always flow in the opposite direction.

You can recreate and observe eddy currents in copper through experiments at home.

One of the most popular experiments involves dropping a magnet through a copper tube. The magnet slows down drastically because its kinetic force is absorbed and turned into an electric current.

If you don’t have a copper tube, use copper wire instead. Create a large coil around a plastic tube. Make sure that the two ends of your wire touch. You need a closed circuit if you want to generate eddy currents. The magnet will slow down its descent when it reaches the copper coil.

Another cool and fun experiment is to put a magnet on top of a copper plate. The magnet will levitate for a few seconds before falling onto the plate.

If you can’t recreate these experiments at home, watch this great YouTube video by NightHawkInLight:

He demonstrates both experiments along with a few others. Plus, he gives a fantastic explanation of what’s happening in the video!

How To Make Copper Magnetic?

Copper can be made magnetic with the help of buckyballs. A buckyball is a carbon molecule that can pull electrons out of metals. When a layer of buckyballs is placed on a non-magnetic metal, it becomes somewhat magnetic.

Since elements are magnetic at an atomic level, we have to play with the structure of electrons in copper to make it magnetic.

Scientists have managed to make magnetic copper with the help of a molecular interface, which was buckyballs in this example.

Copper is extremely resistant to magnetism, so this is almost a miracle.

Which Materials Can Stick to a Magnet?

Each individual electron in a ferromagnetic material behaves like a little magnet.

The electrons spin freely and align themselves with nearby magnetic fields. So, when billions of these tiny electrons all face the same direction in an object, they can extend the magnetic field.

Paramagnetic materials are also attracted to magnets, but their reaction isn’t as strong. They won’t exactly stick to a magnet, but they’ll fly close to powerful magnets. And their electrons don’t change their pattern permanently.

Here are a few common materials that can stick to magnets:

Iron is the strongest ferromagnetic material. That’s why it’s used with magnets to make them stronger and create large, powerful electromagnetic fields.

Eddy currents make all electrons in the outer shell of the material spin in one direction perpendicular to the magnetic field. They cancel each other out and generate electricity and heat.

Only ferromagnetic materials like iron and steel alloys can stick to magnets. Copper can be made magnetic with the help of buckyballs by changing its structure of electrons.