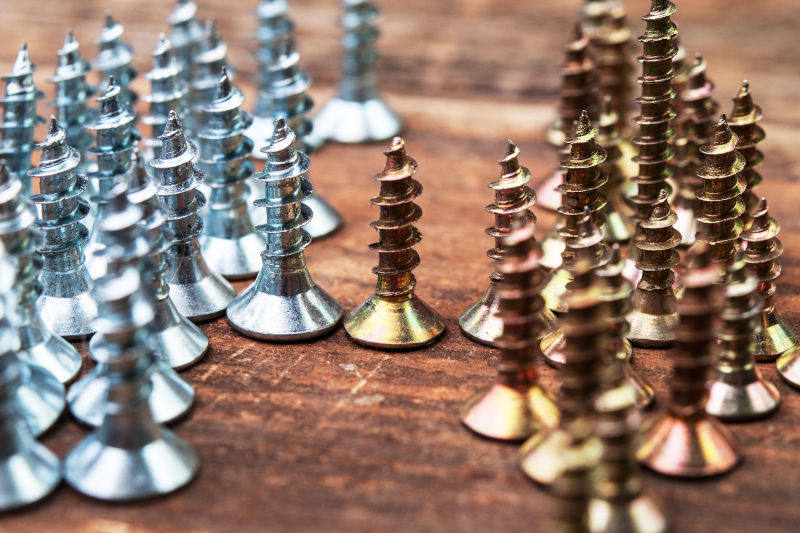 If you’re looking for screws that won’t rust, look no further. There are screws made of many different metal types that will fit the bill.

The Most Rust-Resistant Screws

Finding a rust-resistant screw isn’t like finding a needle in a haystack. Many options are available on the market today that’ll stop rust and corrosion in its tracks.

Stainless steel, ceramic-coated, and galvanized zinc-coated screws are the most rust-resistant screws available on the market. These screws are perfect for projects requiring a longer lifespan and can be used in various situations.

Rust-resistant screws will cost more than traditional screws, but investing in these types of screws is always worth it.

A stainless steel screw is a screw made from a mix of metals containing chromium and nickel. Chromium gives this type of screw resistance to corrosion from water, while nickel creates increased resistance to heat during use. If you’re looking for long-lasting durability without worrying about rust, choose stainless steel screws over other options.

Ceramic-coated screws are made by dipping a product into a ceramic compound before being coated with a colorized metallic finish. This process provides extra protection against scratches and rust. Zinc-coated screws are coated with zinc to create a protective layer. Though this process is more affordable than stainless steel, it’s much less durable because zinc is a relatively soft metal.

A slightly more expensive way to prevent rust on screws is through titanium coating. This process involves applying titanium particles directly onto the surface of the screw for added protection against weather-related elements and high temperatures.

Stainless steel is one of the most common materials used to make screws. It resists corrosion and rust, making it an excellent choice for outdoor applications. Stainless steel screws are popular for their strength and their ability to withstand the elements, as well as for their corrosion resistance.

Stainless steel screws are commonly found in applications that require a longer lifespan or heavy-duty strength. They’re widely used in outdoor projects, such as building decks.

Stainless steel screws can be made with several different alloys, but 18-8 stainless steel is by far the most common. This alloy is composed of chromium and nickel, two elements that contribute to its resistance against rust.

It’s worth noting that the resistance level against rust varies depending on which alloy is used in the screw. Different combinations can produce different results when it comes to corrosion resistance. So, manufacturers often vary their formulation depending on what type of project they’re making screws for.

Iron is one of the most commonly used metals to make screws, and it’s relatively inexpensive compared to other materials. However, iron can rust if it becomes exposed to moisture for too long, which causes serious, irreparable damage.

For this reason, galvanized steel screws are recommended over uncoated screws for any project that’ll be exposed to the elements for extended periods of time because galvanizing helps prevent rust. Screws shouldn’t be used outdoors without first being coated with another metal to keep out water and moisture.

Zinc alloy is a coating on the surface of steel screws that gives it resistance against rusting. The coating applied may vary but typically includes zinc chloride, which is known for its high level of protection. The zinc coating makes these types of screws very popular among carpenters.

These screws are made from a material containing aluminum oxide ceramic, which makes the screws resistant to rust, moisture, and other deformations. These screws also come in various sizes and lengths. Some come with self-drilling points to make installation even easier.

Screws are an essential part of any work that needs a fastener. One of the most popular materials for screws is stainless steel, mainly because it’s highly resistant to rust and it’s a very durable material. Coated stainless steel screws are even more rust-resistant.

Stainless steel is an alloy containing iron and chromium, but other elements such as carbon may be added in small quantities. The main reason it doesn’t rust is because of the chromium atoms on its surface. They reduce the number of free electrons present to facilitate electron transfer from a metal oxide or hydroxide, resulting in a slower corrosion rate. This creates a barrier layer under which further corrosion cannot develop.

When it comes down to choosing between the two types of screws, some prefer zinc while others prefer stainless. The truth is, each has its benefits and detriments — zinc tends to be more affordable while stainless steel resists rusting or moisture better than zinc screws.

However, if you’re looking for a screw that’s easy to use and will hold firmly against your items, stainless steel can be just the right choice for you! Stainless steel screws are perfect for holding up countertops or decks because they don’t corrode or rust as easily as other metal fasteners, such as common aluminum screws. They also remain shiny, so it’s always obvious where they’re located — no need to look around hard-to-see areas such as underneath cabinets!

Steel screws aren’t only long-lasting; they’re also versatile enough to be used across many construction projects. You can find steel screws at Ace Hardware or other hardware stores. Some common uses include:

Additionally, galvanized zinc-coated screws and ceramic screws are less likely to rust because the external coating impedes contact with oxygen. This protective barrier prevents the oxidation that would otherwise cause the screws to corrode and deteriorate over time.