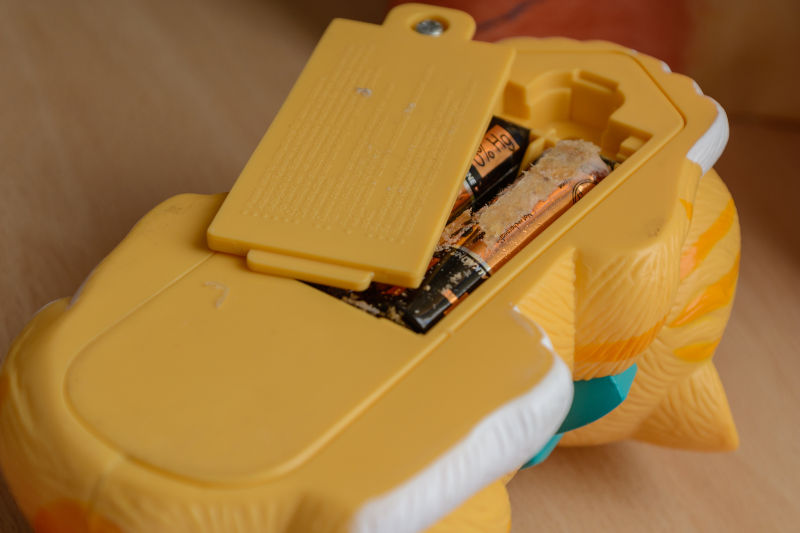 We’ve all experienced it before. Your child brings you a random toy that they found who knows where and, of course, it’s dead. So they ask you to change the batteries. You go find that tiny screwdriver and open the compartment just to see that it’s full of battery acid.

Here’s how to remove battery corrosion in toys:

In the rest of this article, I’ll go over the best ways to clean the battery corrosion out of your child’s toys so they can get back to playing with them.

Is It Necessary to Remove Corrosion From Toys?

When you open up the toy and see that there’s leaking battery acid that has built up in the compartment, you may be tempted just to put it back together and hope for the best. After all, removing the acid can be a tedious process. However, for your child’s safety and to keep the toy in working order, it is necessary to remove the corrosion.

If battery acid leaks into the battery compartment, it can create a layer between the battery and the contact points. As a result, the electricity can’t flow into the toy. Battery acid can also cause severe chemical burns if it gets on your skin.

To get started removing the corrosion, you’ll need a few different supplies:

Do not underestimate the importance of gloves and eye protection. Battery acid can actually cause severe acid burns, but you may not notice right away, making it all the more dangerous. When you touch a hot stove, it immediately hurts, which will let you know that you need to take your hand away from the heat. Battery acid is different.

It may have been on your skin for several hours before you begin to notice the effects of the acid, and those effects can be severe and lead to that area of your skin dying off. It’s even worse if it gets in your eye and can cause temporary or permanent blindness by damaging your cornea.

How to Clean Battery Corrosion in Toys: Step-by-Step

The first step to cleaning battery corrosion is to remove all batteries, even those that aren’t leaking. That’s important to have full access to removing all the corrosion.

If that doesn’t work, the next thing you can try is using a small screwdriver to pry the battery out of the compartment. I’ve never had this one not work, even if the battery compartment is almost completely full of corrosion.

2. Manually Remove the Acid and Corrosion

The next step will be to manually remove as much acid and corrosion as you possibly can. That way, when you apply the chemicals, you don’t have to use as much and should only have to go through one treatment.

The best way to do this step is to take some paper towels and Q-tips and start chipping away. Some people recommend using a toothbrush as it’s a bit more abrasive, but you’ll have to throw it away afterward as you don’t want to cause any acid burns to your teeth.

Once you’ve removed as much of the visible buildup as you can, it’s time to move onto the chemical cleaning phase.

You’ll want to take a Q-tip or a toothbrush, ideally a clean one, and soak it in the vinegar. Then apply the vinegar to the corroded terminals and any other part of the compartment that has buildup. Let it sit for a couple of minutes, then dump any standing solution out and wipe the compartment out with more Q-tips and paper towels.

You may need to repeat this step several times until all of the battery acid has dissolved.

Once you’ve removed all visible corrosion, you’ll want to clean the toy thoroughly and let it dry before you test it out again. The best way is to use some rubbing alcohol. It will remove any coke and vinegar residue that may have been left on the terminals.

After you’ve wiped the compartment out with alcohol, let it dry, which should only take a few minutes, then wipe it out with paper towels dampened with water. It should take care of any remaining particles.

After you’ve done your final wipe-down with water, you’ll want to let the toy dry out completely for several hours before you try putting batteries in it again. Remember, water and electricity don’t mix, so you want to keep everything as dry as possible.

Tips on How to Prevent Battery Corrosion in Toys

To Prevent battery corrosion in toys, keep the toy away from humidity and significant temperature changes and remove the batteries if the toy is going to be stored.

Remove the Batteries When Not Using the Device

One of the most important things you can do to prevent battery leakage is removing the batteries from a device if you’re not going to use it for a while. The only time I’ve ever experienced battery leakage is in a remote that was under the couch for a couple of years, and it was so bad we had to throw the device away.

When you don’t remove the batteries before storing the toy, the batteries will slowly discharge energy into the terminal. Since the power isn’t being used, it can eventually cause the structure of the battery to be compromised, which can lead to a leak.

Batteries also weaken as they age, so if you leave a battery anywhere for an extended period of time, the chance of it leaking and causing acid corrosion increases.

Store in a Cool, Dry Place

Say your child uses the toy all the time, so you don’t want to remove the batteries. That’s fine as long as it’s being actively used, but you want to carefully consider where you’re storing it when you’re not using it.

Like most electrical devices, batteries are sensitive to sunlight and temperature change. Both of those things can cause the batteries to corrode more quickly, which will lead to an acid leak.

When batteries are exposed to temperature change, the metal expands and shrinks. Think about a violin. You constantly have to tune them as the temperature changes because the strings will expand and shrink. Your batteries will do the same thing. The only difference is that batteries contain a dangerous acid. Violin strings do not.

A good place to store batteries is usually in a pantry or basement where the temperature is fairly consistent, and the batteries won’t be exposed to sunlight.

Keep Away From Humidity

Like any metal device, batteries are sensitive to humidity and can begin to rust if kept in humid conditions for too long. This rusting will eventually compromise the structure of the battery and lead to acid leaking, which will cause corrosion.

Keep in mind that all of these tips apply not just to batteries in use but to your family box of batteries as well. If you want to keep them in tiptop condition, then you’ll want to be careful about how you store them. You don’t want to accidentally put an already compromised battery into one of your devices.

As soon as you notice battery corrosion in a toy, you’ll want to clean it out as soon as possible. Battery acid is a dangerous substance that can cause severe chemical burns if it leaks onto your skin and can permanently damage devices.

You’ll want to remove the corrosion using a household acid, like vinegar, and something that you can scrub the corrosion with, like a toothbrush or Q-tips.

To prevent battery corrosion from ever occurring, remove the batteries from devices that aren’t in use, store them in a cool place, and keep them away from moisture.